No. 25 Purdue trying to build momentum against Wisconsin 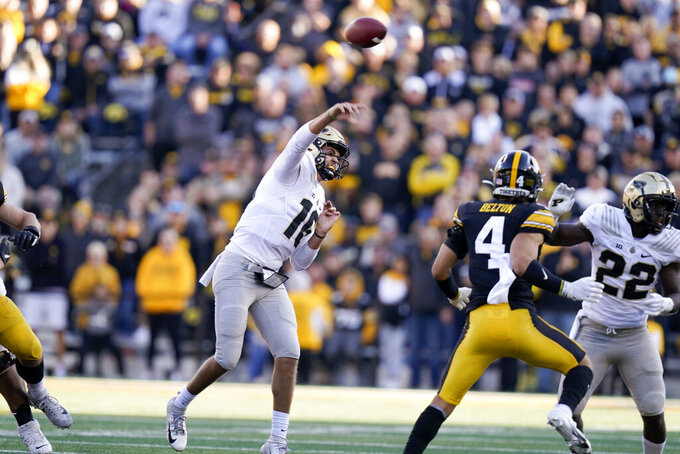 The Boilermakers had just routed No. 2 Ohio State by 29 points and headed to Michigan State hoping to prove their four-game winning streak was no fluke. Instead, they lost the game and their momentum.

On Saturday, Brohm may find out how much progress his program has made in three years when they face a similar situation against Big Ten West Division power Wisconsin.

“Some of our guys were on the team then and you realize that you’ve got to continue to grind, and you’ve got to wipe that feeling away after 24 hours and get back to work," Brohm said. “In my opinion, that’s some of it. The other part of it is, we’re going to play good teams every week from here on out. Playing at home is better, but playing Wisconsin, who we haven’t beat in a long time, we have a tall task."

The Badgers have won two straight and are starting to get back to their traditional identity with a powerful running game and stout defense. Wisconsin ranks second nationally in total defense and third against the run.

And with the West Division title chase wide open after Purdue's stunning blowout win at Iowa, Wisconsin now faces a foe they've beaten 14 times and are playing in a venue where they haven't lost since 1997.

So the Badgers are trying to keep all this in perspective.

“There’s a lot of football left to be played," coach Paul Chryst said. “I still equate the season much like a game. You have to play the whole game out. Same thing with the season.”

The biggest challenge for Wisconsin's defense will be slowing down Purdue receiver David Bell, who caught 11 passes for 240 yards and one score at Iowa.

But Chryst also must prepare for the unknown.

Last week, Brohm unleashed a three-quarterback rotation that worked perfectly. While he hasn't dropped any hints about how he'll use that tactic in future games, he has lost the element of surprise as the Boilermakers try to show the college football world something they couldn't in 2018 — this program is back on track.

“It comes down to preparation and execution and coaching and guys that are willing to pay the price," Brohm said. “We can talk about it all we want and we can work on it. But this is a really good football team and we’ve got to play well to win."

“We learned a lot from studying ourselves in the past and then we looked at a lot of other successful teams in college and the NFL and what they were doing," he said.

Scoring touchdowns has been a serious challenge for the Badgers all season. But the defense has been just as difficult on opponents.

Through six games, the Badgers have allowed only three TDs during the first three quarters and have posted four first-half shutouts. Wisconsin is allowing a meager 3.8 first-half points.

“They challenge routes they make you earn everything," Brohm said. “They load the box. They bring a lot of different pressures, simulated pressures. They play an aggressive style of defense and they’ve always been really good."

After struggling defensively the previous two seasons, Brohm brought in his third defensive coordinator in three years and he finally seems to have the right mix.

Purdue is ranked second among Big Ten teams in total defense, pass defense is tied for second in points allowed (14.0). The Boilermakers also are No. 5 against the run. Chryst has noticed the difference.