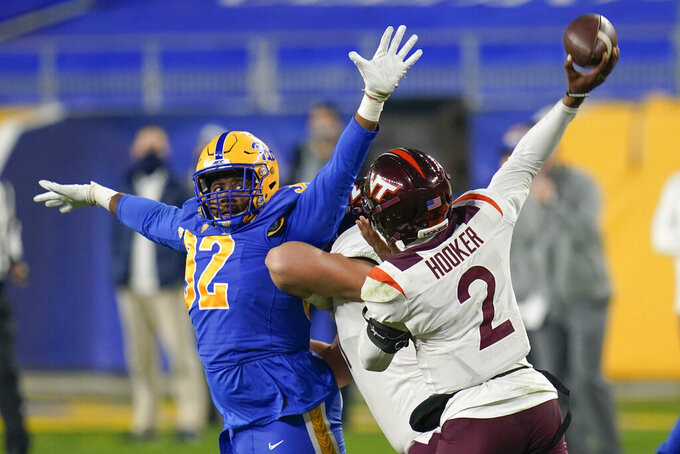 Virginia Tech quarterback Hendon Hooker (2) gets off a pass that went for a touchdown to wide receiver Tre Turner as Pittsburgh defensive lineman Tyler Bentley (92) applies pressure during the first half of an NCAA college football game, Saturday, Nov. 21, 2020, in Pittsburgh. (AP Photo/Keith Srakocic)

The Tigers can clinch a sixth consecutive berth in the ACC championship, and a rematch with No. 2 Notre Dame, which beat the Tigers at home when Clemson was without Trevor Lawrence. The Hokies are looking to end a three-game losing streak.

Virginia Tech's running game against the Clemson defense. The Tigers are allowing just over 100 yards per game on the ground, and while some of that may be related to their tendency to pull ahead, they will face a team whose offense relies on a running game that has averaged 250.9 yards. The ability to slow QB Hendon Hooker and the ground game will be key.

Clemson: Lawrence. As the QB goes, so goes the offense. Despite missing time for COVID-19 issues, he has thrown for 19 touchdowns and just two interceptions. Get him rattled? You might have a chance at taking advantage.

Virginia Tech: Hooker. He is the only Football Bowl Subdivision quarterback with more than one 150-yard rushing performances, and he will need to be at his elusive and productive best against the Tigers.

The Tigers are just 3-3 in games played in December. ... Clemson has won the last five games in the series and holds a 22-12-1 edge, including a 2-0 record in ACC championship games. ... Lawrence returned last week and threw for 403 yards and two TDs. ... Virginia Tech RB Khalil Herbert leads the ACC with an average of 167.8 all-purpose yards per game. ... The Hokies lead the ACC in rushing offense (250.9 ypg), while Clemson ranks third in rushing defense (102.6 ypg).