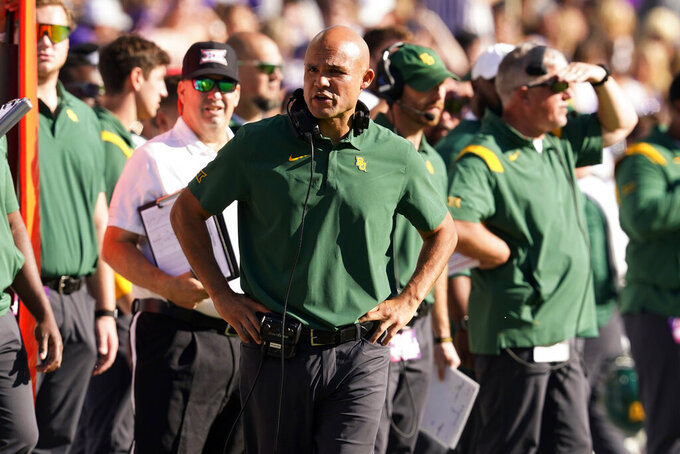 FILE - Baylor head coach Dave Aranda, center, talks to an official standing nearby in the first half of an NCAA college football game against TCU in Fort Worth, Texas, Saturday, Nov. 6, 2021. No. 4 Oklahoma plays at No. 18 Baylor on Saturday, Nov. 13. (AP Photo/Tony Gutierrez, File)

WACO, Texas (AP) — There are always going to be certain games that stick out, and one of those for fourth-ranked Oklahoma is its last trip to Baylor.

Same for the 18th-ranked Bears, except for the wrong reasons.

The Sooners (9-0, 6-0 Big 12, No. 8 CFP) will play Saturday on the banks of the Brazos River for the first time since that prime-time matchup two years ago, when they fell behind 28-3 early in the second quarter before the biggest comeback in school history. They beat previously undefeated Baylor 34-31 that night, and then won the Big 12 championship game over the Bears in overtime three weeks later.

“That game in particular ... I think it did a lot,” Oklahoma coach Lincoln Riley said. “It was obviously a very meaningful game at the time, and yeah, so I think it kind of set that precedent for us that we’re never out of the fight. There’s a belief and an expectation that no matter how a game starts out that we can always make a run.”

After their open date, the Sooners now have three consecutive games against the teams closest to them in the Big 12 standings. They could secure a spot in the Big 12 title game as early as this weekend depending on other outcomes, but their November push is also about trying to get back into the College Football Playoff.

Baylor (7-2, 4-2, No. 13 CFP) still has a chance to make the Big 12 title game for the second time in three seasons. But the Bears are coming off a disappointing loss at struggling TCU. They earlier lost at No. 10 Oklahoma State and beat Iowa State, the other two teams Oklahoma still has to play in the regular season.

“For us, a big motivation has been handling adversity with optimism,” Baylor tight end Ben Sims said. “It’s just another week and we want to win every week. But I guess you can say some guys get more fired up for this week (for Oklahoma) than other weeks.”

Oklahoma's 17-game winning streak is the longest active FBS streak, and best for the Sooners since 20 in a row from 2000-01 that included their last national championship. Oklahoma has won 23 consecutive November games, 11 of them against Top 25 opponents, since a home loss to Baylor in 2014. The Sooners are trying to reach 10-0 for first time since 2004.

Abram Smith, a starting linebacker for Baylor last season, is already a 1,000-yard rusher with 11 TDs. He leads the Big 12, and is third nationally, at 7.3 yards per carry. The Bears, also with do-everything back Trestan Ebner, top the Big 12 with their 230.9 yards per game and 24 TDs.

"Downhill runners, guys that have top-end speed. You see them run away from people, run through tackles,” Oklahoma defensive coordinator Alex Grinch said.

In its biggest comeback since that Baylor game in 2019, Oklahoma last month overcame a 28-7 deficit in the first quarter to beat Texas. Freshman quarterback Caleb Williams has completed 72 of 98 passes (73.5%) for 1,087 yards with 14 TDs and one interception since taking over midway through the second quarter against the Longhorns, and starting the last three games. He also has three rushing TDs of at least 40 yards.

“The quarterback has injected their offense with some firepower,” Baylor coach Dave Aranda said. “Caleb’s ability to hit receivers in stride, with tight coverage, I think stands out. I think the skill on the perimeter stands out.”

Baylor quarterback Gerry Bohanon, the fourth-year junior and first-year starter, didn't throw his first interception of the season until his 153rd pass attempt and in the seventh game of the season. He has since had consecutive games with two interceptions, including a pick near midfield with a minute to go in the 30-28 loss at TCU.

The offensive line is protecting Bohanon. The Bears have allowed only one sack the past four games.