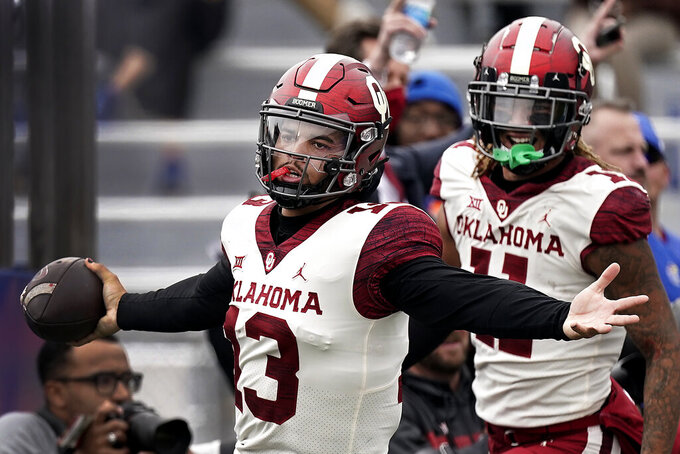 Line: Oklahoma by 19 1/2, according to FanDuel Sportsbook.

Oklahoma dropped from No. 3 to No. 4 in The Associated Press Top 25 poll after a close call against Kansas last week. They need a convincing win, especially with the first College Football Playoff rankings set to be released next week. Even with several close calls this season, Oklahoma is on a 16-game win streak. Texas Tech could get a big win for Sonny Cumbie in his first game as interim coach. The Red Raiders fired coach Matt Wells on Monday.

Texas Tech’s run defense vs. Oklahoma RB Kennedy Brooks. Tech has held five of its eight opponents under 100 yards rushing, but TCU gouged the Red Raiders for 394 yards on the ground earlier this month. Brooks has averaged 149.7 yards rushing in his past three games.

Texas Tech: RB SaRodorick Thompson. He has eight rushing touchdowns and has found the end zone two or more times in three of the last four games. He is tied for seventh all-time in Texas Tech history with 31 career rushing touchdowns.

Oklahoma: QB Caleb Williams. Since taking over for Spencer Rattler during the Texas game, he has completed 72% of his passes for 685 yards and eight touchdowns. His 192.6 passer rating is third best nationally during the three-game stretch. He also has rushed for 224 yards and three touchdowns on just 21 carries in those contests.

It is the Sooners’ first 8-0 start since 2004. ... Oklahoma has won nine straight against Texas Tech. ... A victory over Oklahoma would give the Red Raiders three wins in the month of October for the first time since 2009. ... The Sooners have scored at least 38 points in each of their last 11 games against the Red Raiders. It is tied for the longest streak against an opponent in school history.