No. 4 Oklahoma looks to put pieces together vs. Texas Tech 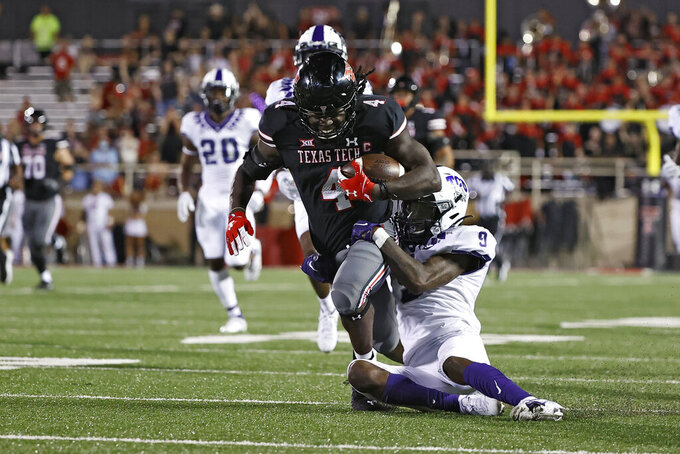 Even he revealed a tinge of worry after yet another game that was closer than expected.

Oklahoma trailed struggling Kansas last week before rallying in the second half to win 35-23. The Sooners still are unbeaten, but they dropped from No. 3 to No. 4 in the AP Top 25 this week.

“We feel like — I don’t have any problem saying it — we feel like there’s a number of older veteran guys on this team right now that need to be at their best, and this team needs them to be better,” Riley said. “And we’ve made that clear.”

Riley also has issue with the team's inconsistent play. At times, the offense, defense and special teams have bailed out the other units. Even with the Sooners on a nation-leading 16-game win streak, he knows the Sooners need to be better.

“We realize we’ve got to be able to string together some quality football between all three sides the ball more often, and we’ll make those runs like we have in a few of the games this year,” he said. “So that’s that’s been a big emphasis point for our guys, our team.”

Oklahoma's problems are minor compared to those at Texas Tech. The school has fired coach Matt Wells, and assistant Sonny Cumbie has been named interim coach.

“Tough to hear the news about Matt Wells,” Riley said. “He’s a good friend. I got to know him a little bit before I got into this league and certainly during the different events within this league. One of the great guys in coaching. He’s a heck of a ball coach and he’s going to get his chance to continue leading good programs in the future.”

“I know he’ll do a great job leading that program through a tough situation,” Riley said. “I’m excited for Sonny, personally, and his opportunity. We look forward to Saturday and getting a chance to compete against those guys.”

Since taking over for Spencer Rattler during the Texas game, Oklahoma quarterback Caleb Williams has completed 72% of his passes for 685 yards and eight touchdowns. His 192.6 passer rating is third-best nationally during the three-game stretch.

Texas Tech is known for its aerial attack, but the Red Raiders have had success running the ball this season. The Red Raiders have rushed for 23 touchdowns this season, tied for fifth nationally. SaRodorick Thompson leads the way with eight rushing touchdowns. He has found the end zone two or more times in three of the last four games. He is now tied for seventh all-time in Texas Tech history with 31 career rushing touchdowns.

Cumbie had a busy Monday when the announcement that he'd take over was made. It's the day Tech normally installs its game plan for the week,

“We spent pretty much the whole day tending to the needs of our players, to our family,” he said. “That was really what we did — talk to them, talk to recruits, talk to their parents. Really our message to the players is we want to give them the best experience they can have. We want to coach them as hard as we can. We want to go out and win as many football games as we can. That’s what we owe those guys.”

Oklahoma's defense is better than in years past, but not as good as it looked earlier in the season. The Sooners have one of the nation's worst pass defenses. Injuries have hurt the secondary, but more importantly, there has been an effort problem.

Oklahoma defensive coordinator Alex Grinch said the players are starting to come around.

“It pains me to say that nine weeks into the season we’re finally seeing more intentional work,” he said. “What are we doing wrong as coaches? How am I not landing the message? It’s all of our fault, cool, but I’m the one talking so it’s my fault. It’s my fault that I can’t inspire and motivate to get guys to play at their best.”

Oklahoma running back Kennedy Brooks has been on a tear lately. In his past three games, he’s averaged 149.7 yards rushing and has five touchdowns. He ranks 16th nationally with 767 yards rushing.