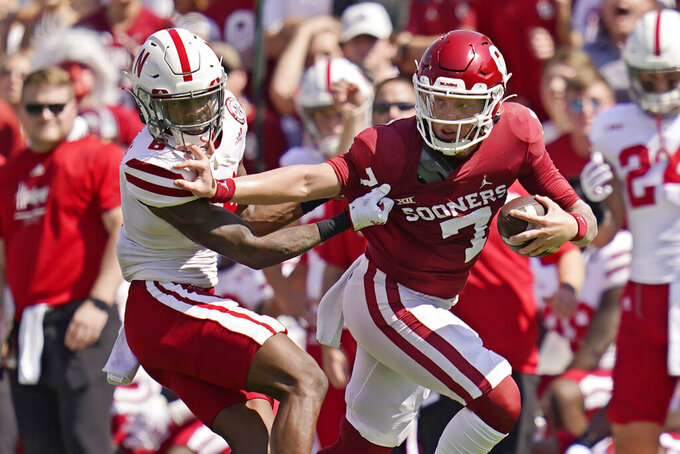 NORMAN, Okla. (AP) — It wasn’t pretty, but No. 4 Oklahoma manage to escape its non-conference slate unscathed.

Though the Sooners barely squeaked out victories over Tulane and Nebraska that were supposed to be blowout wins, their goal of a national title remains reachable.

“I mean, we’re 3-0,” he said. “Not much complaining, but everybody wants to be better. There’s never a point where we want to stop and stay here. We always want to climb up.”

West Virginia ranks first nationally in red zone defense and fourth in tackles for loss. On offense, running back Leddie Brown leads the Big 12 with six touchdowns, and quarterback Jarret Doege is heading into his 17th career start.

“This is a complete football team coming in here,” Oklahoma coach Lincoln Riley said. “Experienced quarterback, strong run game and one of the top defenses in the country.”

Oklahoma was scheduled to play West Virginia last year, but the game was canceled because of COVID-19 cases and contact tracing in the Oklahoma program.

“It’s a team that we didn’t play a year ago but prepared at length for, which is just unique when you turn back on the film because there’s no opponent that you’ve never played or you haven’t played in two years that you’ve seen so much film on, which is the same thing obviously for them on their end,” Oklahoma defensive coordinator Alex Grinch said.

“The thing about Rattler is his arm talent is so unique,” Brown said. “He can move. He extends plays. They can run him if they want to run him. They choose not to. But he has one of the strongest arms and one of the quickest releases that I’ve seen in however long I’ve been doing it.”

Oklahoma cornerback D.J. Graham’s spectacular one-handed interception against Nebraska was one of the plays of the college season.

His leaping right-handed grab snuffed out a Cornhuskers threat with the Sooners ahead 23-9.

Not surprisingly, it came from a player with experience playing offense. Graham was a receiver at Keller Central High School in Fort Worth, Texas, and was recruited as an athlete -- not a offensive or defensive specialist.

Graham wasn’t initially thrilled with being moved to defense, but he has embraced it.

“I just think he was trying to convince himself that this was the right thing,” Riley said. “As he got the hang of it he got out there, he had some success. I think he’s fully convinced now. It’s been a good move for him the right move for him.”

West Virginia is 0-8 against the Sooners since joining the Big 12. Most of those games since 2012 have been blowouts.

“Our biggest challenge so far is this, without a doubt,” Brown said.

The closest the Mountaineers came was in 2012, when Landry Jones’ 5-yard touchdown pass to Kenny Stills with 24 seconds left lifted Oklahoma to a 50-49 win in Morgantown. In 2018, the Sooners returned two Will Grier fumbles for touchdowns and held off West Virginia 59-56 on the road.

Rattler entered the season as one of the favorites to contend for the Heisman Trophy, and his numbers are solid. He has completed 75% of his passes and has seven touchdown passes and two interceptions.

Still, sometimes, he makes mistakes when trying to do more than necessary.

“The thing with Spencer is continue to stay patient, continue to play within the system and trust his teammates, trust what we’re doing and if we can all do that as a group, we’ll continue and we’ll bust through and play pretty well coming up soon,” Riley said.