No. 5 Notre Dame faces No. 9 Oklahoma State in Fiesta Bowl 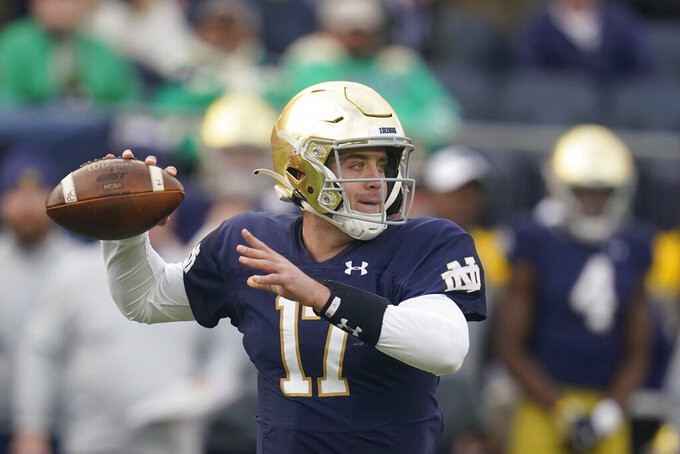 FILE - Notre Dame quarterback Jack Coan (17) throws during the first half of an NCAA college football game against Georgia Tech, Saturday, Nov. 20, 2021, in South Bend, Ind. Coan finally got a chance to don the Irish blue and gold in his final college season. He gets a chance to cap his season in a major way at the New Year's Day Fiesta Bowl. (AP Photo/Darron Cummings, File)

GLENDALE, Ariz. (AP) — No. 5 Notre Dame lost its coach and its chance at playing in the College Football Playoff in a span of six days, a tumultuous stretch that could have sent the program spiraling.

New Irish coach Marcus Freeman has steadied the rudder, kept the Irish focused as they prepare to face No. 9 Oklahoma State in Saturday's Fiesta Bowl.

The 35-year-old first-time head coach reminded the players there's still a major bowl to win, a chance to end the season on a high note and send the seniors out the right way.

“You’re at a place like Notre Dame, a lot of guys are used to being in the playoffs and things like that,” Notre Dame quarterback Jack Coan said. “So you might take a breath or a step back and saying you’re not in the playoff; you’re just in a bowl game. But for him to say that we’re going to do this and this is a business trip, we’re going to go out and win, it means a ton to me.”

The Irish had hoped it would be in the CFP for the first time since 2019. Their only loss was to No. 4 Cincinnati on Oct. 2, but, sitting at No. 6 in the rankings, they needed a bit of chaos on the final weekend of the regular season to get in.

It didn't happen. Wins by Cincinnati and No. 2 Michigan left Notre Dame on the outside looking in at No. 5 in the final CFP rankings.

Oklahoma State was even closer — inches.

Needing to win the Big 12 championship game to get into the CFP, the Cowboys (11-2) rallied from an 18-point deficit and drove nearly the length of the field against Baylor in the closing seconds.

Oklahoma State's last-ditch effort just missed when Dezmon Jackson's reach for the end zone pylon came up just short in the closing seconds in a 21-16 loss.

So instead of playing for a chance to get in the national championship game, the Cowboys finished No. 9 in the final CFP rankings.

Oklahoma State suffered a huge loss when running back Jaylen Warren wasn't able to play in the Big 12 title game due to a lingering ankle injury. The senior transfer from Utah State was the Cowboys' leading rusher with 1,134 yards and 11 touchdowns, and not having him hampered their offense against Baylor.

The long gap between the Big 12 title game and the Fiesta Bowl gave Warren a chance to heal up, adding a big weapon back into Oklahoma State's offense.

“He was our go-to guy all year long. To have him back and available for this game, at least so we think, that’s going to make a difference,” Oklahoma State offensive coordinator Kasey Dunn said. “The kid is a great player and he’s a sparkplug for our offense. And the kids love him and they rally around him.”

Oklahoma State's ability to move the ball on Saturday may hinge on slowing down Notre Dame's Isaiah Foskey.

The 6-foot-5, 260-pound junior was one of the best defensive linemen in the country, finishing 16th in the FBS with 10 sacks. Foskey has 11.5 tackles for loss and was second nationally with five forced fumbles, including two against Georgia Tech. He's third on the team with 47 tackles.

“I started doing a little bit less, just focusing on my craft and what I can perfect,” Foskey said. “That’s what I mean by doing less. Like, less stunts and doing less exotic moves, and doing what I can do, since I know what I can do on the field.”