No. 5 Ohio State prepares for biggest test yet vs. Nebraska 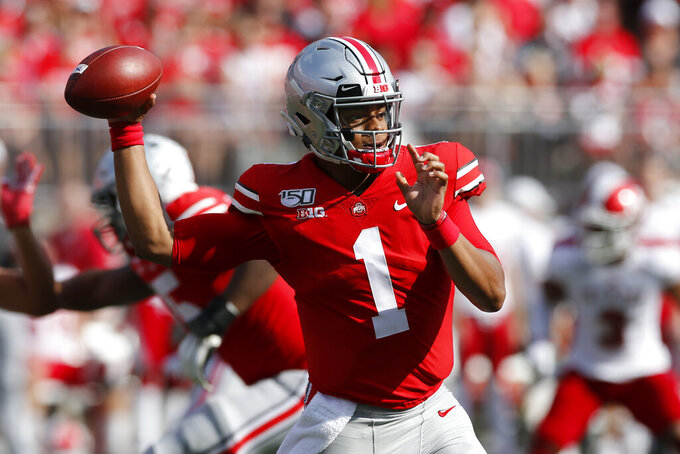 COLUMBUS, Ohio (AP) — The upcoming game at Nebraska has been circled on the calendar for a while as potentially the first tough test for an Ohio State team that entered the season with a lot of questions.

The No. 5 Buckeyes are rolling, but they also know Nebraska (3-1, 1-0 Big Ten) has better athletes than any of the teams they flattened in the first four games. They will also be on the road in a hostile environment Saturday and Huskers quarterback Adrian Martinez is the most dynamic player they've faced.

"We know what a challenge it will be on the road, and we know how big it will be to get the win on the road at a tough place to play," Ohio State coach Ryan Day said Tuesday. "They're going to be all jacked up, (ESPN's) Gameday is going to be there. We have to handle that. It's our first big challenge as a team."

Martinez, who was recruited by Ohio State when Day was an assistant to Urban Meyer, is the same big, dual-threat guy who accounted for 338 yards of offense and three touchdowns to keep the game close in a 36-31 loss to the Buckeyes at Ohio Stadium last season. In Nebraska's win last week over Illinois, he threw for 327 yards and three touchdowns and ran for another, becoming the second player in school history to throw for 300 yards and run for 100 in a game.

"When you combine his ability to run and throw, along with his intelligence and game management, he is by far the best quarterback we've seen," Day said.

Justin Fields is shaping up to be everything Day expected when he lured him from Georgia. He threw for four touchdowns, bringing his season total to 13, and ran for two more last week against Miami. He started the game with a fumble in the end zone for a safety but engineered 47 points in the second quarter alone on the way to a 76-5 Ohio State victory. He has yet to throw an interception.

"He hasn't made a lot of tough throws, and I think that's good on his part," receiver Austin Mack said. "I think he's been very mature knowing when he needs to force a throw and when he doesn't. He can run, so he can take off and run. Dwyane (Haskins) didn't have that ability too much. A guy like (Fields), he's very mature, and he's really good at making pretty good decisions."

Scott Frost's team so far hasn't been as dominating as many predicted. After a season-opening win over South Alabama, Nebraska lost to Colorado and then had to rally to beat Illinois on the road last week. The Buckeyes were listed as a 17-point favorite on Tuesday.

Frost said Ohio State is his team's biggest challenge since he got to Lincoln.

"They have future Sunday players all across their lineup," Frost said.

Martinez said the Huskers are ready .

"Our guys are focused, and that's what we're going to continue to be," Martinez said. "Stacking good days. There's not much else to it. The guys know the task at hand and realize that we have to be dialed in and focused this week."

NOTES: Ohio State junior safety Isaiah Pryor intends to transfer after being listed as unavailable for the game last week. ... Nebraska has lost nine straight games to Top 5 teams since knocking off Oklahoma in 2001.