No. 6 Buckeyes hang on to win 26-17 over struggling Huskers 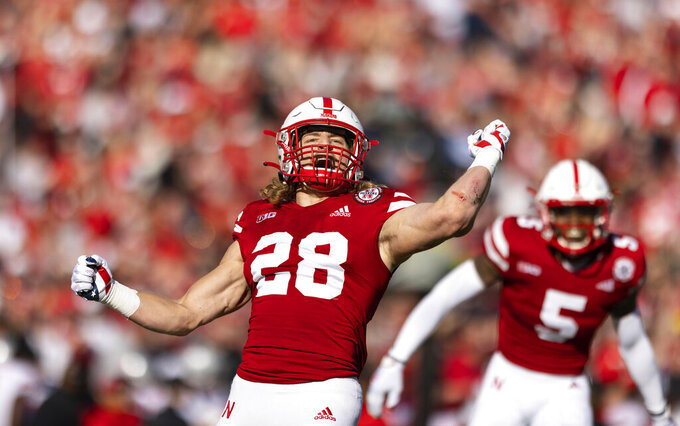 Nebraska's Luke Reimer (28) celebrates after breaking up an Ohio State pass to force a turnover on downs during the first half of an NCAA college football game Saturday, Nov. 6, 2021, at Memorial Stadium in Lincoln, Neb. Ohio beat Nebraska 26-17. (AP Photo/Rebecca S. Gratz)

LINCOLN, Neb. (AP) — A nine-point win over the last-place team in the Big Ten West might not satisfy Ohio State's fan base.

Buckeyes coach Ryan Day was just fine with it.

C.J. Stroud threw for 405 yards and two touchdowns, Ohio State's defense came up with a pair of stops after Nebraska had pulled within six points, and the sixth-ranked Buckeyes got out of Memorial Stadium with a 26-17 win on Saturday.

“We’re going to watch it and think we could have won by three touchdowns or more if we clean some things up,” Day said. “But (Nebraska) is a good team, this is a good defense. We knew that coming in, I said that, and I believe that. It's great to get wins on the road. It's not easy to do.”

The Buckeyes' nation-leading offense managed only two field goals in the second half, allowing the Cornhuskers — a two-touchdown underdog, according to FanDuel Sportsbook — to make it a one-score game until Noah Ruggles kicked a 46-yard field goal with 1:29 left.

Ohio State (8-1, 6-0 Big Ten) won its 24th straight game against a conference opponent but couldn't have impressed the committee that made it No. 5 in the initial College Football Playoff rankings.

“Some things weren't clicking right, and they put it on me to execute the passing game, and I felt we did that well,” Stroud said. “We have to start executing and finishing drives."

The Huskers (3-7, 1-6) dropped their fourth straight game and are assured of a fourth consecutive losing season under Scott Frost and a fifth in a row overall.

“I hate losing more than anybody in that locker room,” Frost said. “But I just love being the coach here, I love these kids. They battled through a lot. This is going to pop at Nebraska. It just is. We're doing too many good things right. We have too many good young players. We're putting ourselves in position to win too many games and just not making a play or catching a break.”

The Buckeyes played without top receiver Garrett Wilson for an undisclosed reason but got a school-record 15 catches from Jaxon Smith-Njigba for a career-high 240 yards.

Stroud completed 36 of 54 passes but threw two interceptions after having gone four straight games without being picked off.

His 3-yard touchdown pass to Chris Olave and Smith-Njigba's 75-yard catch-and-run for a TD helped put the Buckeyes up 20-10 at half.

The Huskers scored late in the third quarter to pull within 23-17 and got the ball right back when Myles Farmer intercepted Stroud's deep ball intended for Olave. Nebraska drove to the 13, but Chase Contreraz missed a 30-yard field goal attempt.

The Buckeyes were forced to punt and Nebraska began its next possession at its 10 with 6:11 left. Adrian Martinez started it with a 21-run but threw three straight incomplete passes to bring on the punter.

Martinez was 16 of 31 for 248 yards and a touchdown, with his lone interception coming in the final minute. He ran 18 times for 51 yards and a score.

Nebraska's Samori Toure had four catches for 150 yards and a touchdown.

“I’m proud of our guys for continuing to fight and the way we had each other's backs out there and stuck together through everything, through the noise,” Martinez said. “The brotherhood is strong here at Nebraska and we believe in each other, so we’re going to keep pressing on.”

Ohio State: The Buckeyes played an uninspired second half of offense but held on to avoid their first loss to a team with a losing record since 2011.

Nebraska: The Huskers have lost 16 straight against ranked opponents, and special teams hurt them again. They missed two field goals and had a 13-yard punt that led to an Ohio State touchdown.

Ohio State could get dinged by AP Top 25 voters, and the CFP committee also might do a double-take after the flat performance.

Frost disclosed after the game that Martinez has been playing with a broken jaw since late September and high ankle sprain since mid-October. Martinez decided to not have season-ending surgery on his jaw so he could continue playing.

An hour before kickoff, about a dozen players from each team jawed at each other during a brief confrontation in the area where Nebraska was warming up. A Nebraska player shoved an Ohio State player in the chest before staff from both teams broke things up.