No. 6 LSU on guard against upset-minded UAB 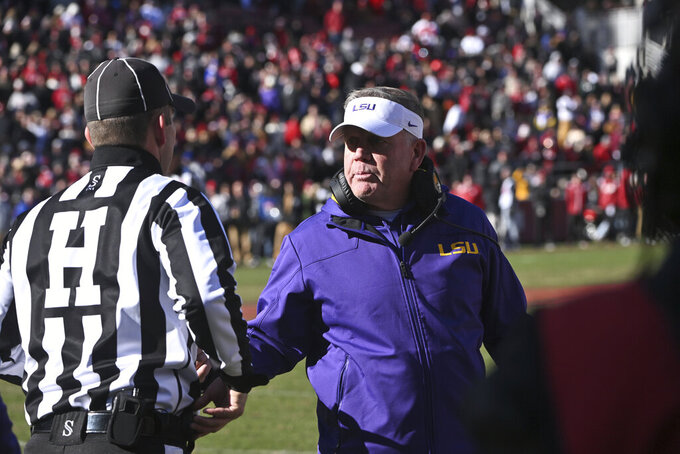 LSU coach Brian Kelly talks to the official during a timeout against Arkansas in the second half of an NCAA college football game Saturday, Nov. 12, 2022, in Fayetteville, Ark. (AP Photo/Michael Woods)

It's also a chance for fans in Tiger Stadium to honor the remarkable success story LSU has become during coach Brian Kelly’s first season on the bayou.

After going two seasons without a winning record, LSU (8-2) is back among the Southeastern Conference elite, having clinched a berth in the league title game by winning the SEC Western Division before mid-November.

But the Tigers cannot afford a loss to UAB (5-5) and still expect to be taken seriously as candidates for the four-team College Football Playoff.

“The job’s not finished," LSU defensive end Ali Gaye said. “All the confetti and everything is cool and all, but we still have a job to accomplish. ... It's not just the division; we’re trying to go higher.”

While FanDuel Sportsbook lists LSU as a two-touchdown favorite, UAB can be encouraged by its own history in Death Valley. The Blazers are one of just two nonconference teams to win there since 2000 — the year UAB upset LSU 13-10.

“We’ve got former players that are connected to this program that were on that (2000) team,” UAB coach Bryant Vincent said. “This is a game that our players and this football team — we’re not going to back down. This football team is excited to go into Death Valley on a Saturday night and to play a nationally ranked sixth team that’s going to play for the SEC championship.”

Kelly, meanwhile, highlighted LSU's challenge this week by citing not only the difficulty the Tigers had in their 13-10 escape at Arkansas last week, but also the fact that all five of the Blazers' losses have come by a touchdown or less.

UAB is “a team that, quite frankly, is better than its record,” Kelly said. “They’ve had three or four losses that could easily be wins, and this could be one of the top teams in the non-Power Five that would be coming into Tiger Stadium.”

LSU freshman linebacker Harold Perkins has emerged as one of the biggest stars on the team, wrecking opponents' offensive game plans with his closing speed and instinctive play.

He was named the Walter Camp national defensive player of the week for last Saturday's performance at Arkansas, where he had four sacks and two forced fumbles, the second of which effectively ended the game.

Kelly credits the effectiveness of LSU's entire defensive front with helping the Tigers maximize Perkins' talent. The defensive line causes QB's to scramble out of the pocket, and “Perk,” as he's called by teammates, comes racing in to make a play.

“It’s pretty impressive, the marriage, if you will, between the two,” Kelly said. “You have a group that can get a quarterback outside the pocket and then go chase him down."

UAB's running back tandem of DeWayne McBride and Jermaine Brown Jr. have combined to eclipse 2,000 yards and 20 TDs rushing for a second straight season. McBride leads the nation with 1,407 yards rushing.

“Up front, we’re going to have to buckle down," LSU's Gaye said.

McBride said he'll do what he does best and make the Tigers stop it.

“I take the same approach no matter who it is,” McBride said, adding that his favorite aspect of playing his position is "running through somebody’s face.”

Kelly said LSU has to adapt better when a defense sells out to stop dual-threat Tigers quarterback Jayden Daniels, as Arkansas did last week with relentless blitzing.

Daniels was sacked seven ties last week and now faces a UAB defense coming off a strong showing in a 41-21 victory over North Texas, which leads Conference USA offensively.

Kelly said he and his staff “have to prepare for those kinds of situations where defenses just say we’re just going to give you everything we’ve got, and what do we have to lose?”

When Kelly was asked about LSU's remarkable one-season turnaround, he touched specifically on his players' attitudes and decision-making.