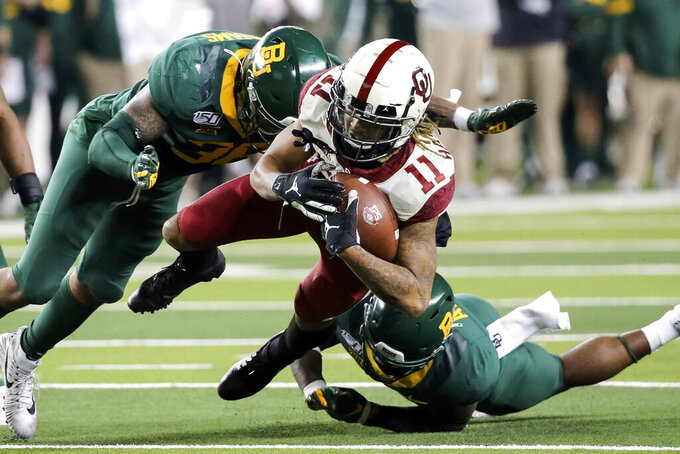 When Baylor jumped out to a quick 25-point lead over Oklahoma, there was a sense for the Bears that they really did belong in those conversations about being a Big 12 contender — and maybe even bigger things.

That feeling didn’t go away, even after the 12-time Big 12 champion Sooners had their biggest comeback ever to ruin a big night for the Bears, who had won 11 games in a row until then.

“It just changes your level of expectation,” Baylor coach Matt Rhule said. “So, that game can do nothing but help us as long as we make sure that we learn from it, which I think we have.”

Utah was No. 5 in the CFP, directly ahead of Oklahoma and Baylor. Georgia, No. 4 in the playoff rankings, takes on AP No. 1 LSU, for the SEC title on Saturday — after the Big 12 game.

This is a familiar spot for the Sooners, in the Big 12 title game for the 11th time, including all three since the league was able to reinstate that game in the playoff era after a six-year hiatus. The four-time defending champs are the league’s only team to make the College Football Playoff, getting to a national semifinal three of the past four seasons.

Oklahoma coach Lincoln Riley hasn’t spent a lot of time thinking about what happened on the banks of the Brazos River, when quarterback Jalen Hurts overcame three turnovers with four touchdown passes and 114 yards rushing in a 34-31 win — after Baylor led 28-3 early in the second quarter.

“That was a great night, but that was multiple weeks ago. It was two really good football teams going at it. They played better than we did in the first half, we played better than they did in the second half, tight game,” Riley said. “This one's different. Championship games are different. Playing not at home, not on the road. ... The stakes are different, the setting’s different, the teams are at different points.”

Rhule, voted this week by his Big 12 peers as coach of the year, has taken a similar approach. But he believes the Bears, the only Power Five team ever to go from 11 losses to 11 wins within two seasons, are already “a way better team” than they were only three weeks ago.

Baylor and quarterback Charlie Brewer rebounded from that only loss with convincing wins over Texas and at Kansas to finish the regular season.

Some other things about the 18th Big 12 title game, which was also played in the home stadium of the NFL’s Dallas Cowboys in 2009 and 2010:

“You have to account for him anytime he’s on the field,” Rhule said.

Rhule took Temple to consecutive American Athletic Conference championship games before taking the Baylor job. He didn’t have to face a rematch in the AAC, but learned something about title games.

After the Owls lost at Houston in the 2015 AAC game, they won 34-10 the following year on the road against a Navy team coming off a stretch of games scoring 42, 66 and 75 points.

“I messed the first championship game up by changing what we did. I worried too much about them,” Rhule said.

In 2016, despite the “dazed look” he had watching Navy's impressive offense, Rhule had a message for his Temple team, one that now applies to Baylor

“We said let’s go out there and be us, and be how we play," Rhule said. “That’s my message to our guys. We’re a legitimate, legitimate football team in the country this year. Let’s not do anything different.”

MORE THAN ANYBODY ELSE

Oklahoma is in the Big 12 championship game for the 11th time, matching the combined total appearances by all of the other current conference members. The Sooners have nine wins in the game, with the next closest being three wins by Texas (in six appearances, matching former Big 12 team Nebraska for the second-most times in the game),

FIVE IN A ROW

Oklahoma has a chance to become the first Power Five team since Alabama from 1971-75 to win five outright conference titles in a row. Clemson could do that in the ACC on Saturday night.

Big 12 defensive player of the year James Lynch has 10½ sacks this season, and the junior DE is Baylor’s career leader with 19. ... Oklahoma RB Kennedy Brooks has averaged 133.5 yards rushing in a four-game winning streak, even with Baylor limiting him to 93 yards. He averages a Big 12-best 7.2 yards per carry.