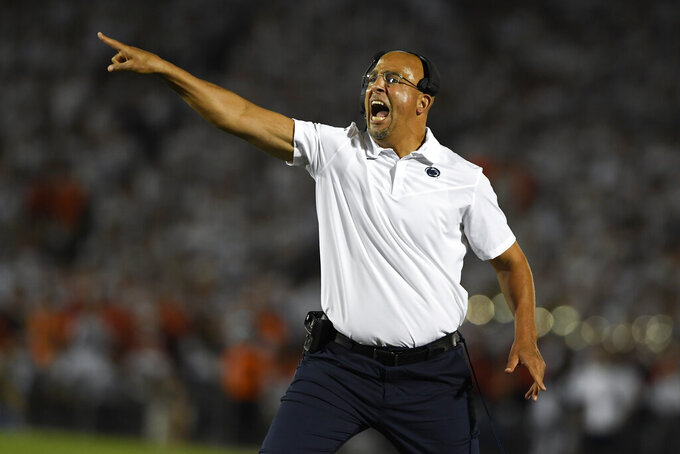 Franklin cited 13 games in which FBS teams lost to FCS opponents and made sure to relay the message to his No. 6 Nittany Lions (3-0), who host Villanova (3-0) on Saturday.

A week after nearly 110,000 fans packed Beaver Stadium to watch the first matchup with an Southeastern Conference opponent in a decade, they will file in again to watch an in-state underdog try to add to the list of FBS teams that have defeated their FCS little brothers.

“We’ve just got to be prepared,” Franklin said. “Got a lot of respect for their program and their university as a whole. They’ve made it to the FCS playoffs 13 times. They’ve won a national championship. They’re currently ranked No. 11 in FCS. Got a ton of respect for them.”

The feeling is mutual.

The two campuses are separated by 180 miles, or about a three-hour drive. Villanova coach Mark Ferrante, having reviewed Penn State’s win over Auburn, is well aware of the atmosphere that awaits.

He and the Wildcats have prepared all week to arrive early on Friday to do something they usually don’t do — take a walk through enemy territory.

“We always talk about trying to block out distractions and there will be more distractions with this one than maybe other games,” Ferrante said.

The goal is to get what Ferrante described as the “oohs and ahs” out of the way.

“It’ll be a great experience for our guys,” he said. “A lot of the players at the FCS level all feel that they should play at the FBS level. To be able to walk into the second-largest stadium in the United States and to go out there and play against a team that’s obviously a top-10 team within our own state is tremendous.”

Franklin has known Ferrante for a while and knows he’s not a “moral victories” kind of coach. The Nittany Lions have seen enough on film to make them wary of a handful of Wildcats.

Villanova’s offense and defense are both ranked among the top 10 in FCS programs. The Wildcats are averaging 45.3 points per game and allowing just 11.

“I really like what they do schematically,” Franklin said. “We’ve been very impressed with them.”

Wideout Jahan Dotson is coming off arguably his best game and it’s no secret that offensive coordinator Mike Yurcich wants to get his best playmaker the ball.

If last week was any evidence, the Wildcats could be seeing a lot of No. 5 on Saturday.

Penn State opened the Auburn game with an end-around to the speedy wideout and let him throw a pass later in the game. Dotson has caught a touchdown in five consecutive games.

Both Penn State’s Sean Clifford and Villanova’s Daniel Smith are coming off their finest games of the season.

Clifford completed 87.5% of his passes for 280 yards and a pair of touchdowns against Auburn while Smith had four scores and 350 yards in Villanova’s win over Richmond.

Teams have moved the ball on Penn State’s defense, but scoring has been a much tougher task.

The Nittany Lions rank ninth among FBS teams in red-zone defense. Opponents have scored just 54% of the time and Penn State has forced three four turnovers and blocked a field goal when opponents are inside 20 yards.

These two programs haven’t met since 1951. They have played nine games, with Penn State owning a 5-3-1 advantage. Villanova won the last three games dating back to 1936.