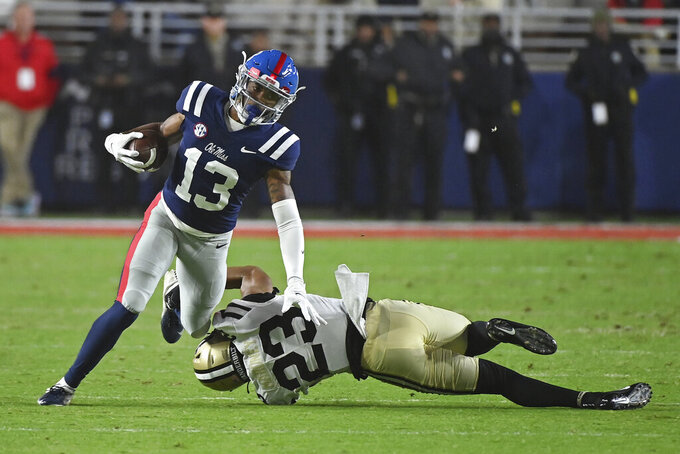 Eye-popping offensive numbers have sparked improvements by No. 8 Mississippi and Mississippi State and make their in-state rivalry showdown even more intriguing.

The Rebels (9-2, 5-2 Southeastern Conference) and Bulldogs (7-4, 4-3) both bring winning streaks into the 94th Egg Bowl. One of those streaks will end on Thanksgiving night as their high-powered attacks take turns putting the ball in the air in Starkville Thursday.

“It’s a very important game,” Ole Miss running back Jerrion Ealy said. “It actually means something this year. Both teams are pretty good. This game is going to be a very valuable game.”

Not to mention, one that could potentially obliterate the 1,029 combined yards last fall as Ole Miss adapted to coach Lane Kiffin’s run pass option while MSU transitioned to Mike Leach’s Air Raid scheme. The Rebels piled up 550 yards and won 31-24 in Oxford.

Both teams have turned things up a notch this season and rank among the nation’s best offenses. The Rebels, who have won three consecutive games, boast the fifth-ranked outfit in FBS (517.5 yards per game) and are led by quarterback Matt Corral.

He has thrived with his arm and feet, passing for 3,105 yards passing and 19 touchdowns and rushing for 552 yards with 10 TDs. Both are reasons Corral is considered a Heisman Trophy candidate.

“He figures out who to deal the ball to, throws it pretty well, hands it off and runs it himself,” Leach noted of Corral.

MSU has won its past two and features the SEC’s top passer in sophomore Will Rogers, whose 4,113 yards and 34 touchdowns are among his multiple school records. He threw for a freshman-record 440 yards last November in Oxford and has surpassed 400 yards four times this season.

Though Leach understands what winning the Golden Egg trophy means to the program and community, he wants players to stay focused on the simple goal of adding another victory to their turnaround.

“Everybody should be on the same page,” Leach added. “Avoid the noise and just worry about being the best player and being the best team that we can be.”

It’s the final regular season game and last Egg Bowl for Ole Miss junior quarterback Matt Corral, who is headed to the NFL after this season. Corral had a huge game against Mississippi State last season, completing 24 of 36 passes for 385 yards with a pair of touchdowns (along with two interceptions). It was the most passing yards by a Rebels QB in the Egg Bowl.

Mississippi State receiver Makai Polk will break Fred Ross’ single-season record of 88 catches (2015) with his next reception. His 891 yards rank 10th in program history for a single season and put him among five Bulldogs to surpass 800 yards through 11 games since 2000.

For all the attention focused on Corral’s passing, the QB is also part of an impressive Ole Miss rushing trio with at least 500 yards each. Early (643) leads the team, followed by Snoop Conner (561) and Corral (552). The Rebels average a league-best 231.1 yards rushing per outing and rank sixth nationally.

Mississippi State enters perhaps its biggest defensive ranked third in the SEC against the run with 96 yards allowed per game and fourth in total defense at 325.6. Ole Miss has the league’s second-best pass rush with 37 sacks, one behind Georgia. Rebels lineman Sam Williams is second with a school-record 10.5 sacks and linebacker Chance Campbell is fourth with 89 tackles.

Ole Miss wide receiver Jonathan Mingo has a strong connection with both quarterbacks. He and the Bulldogs’ Will Rogers both played for Brandon (Mississippi) High School and remain tight.

Mingo returned in a limited role last week against Vanderbilt after missing seven games with a lower leg injury. He had one catch for two yards.