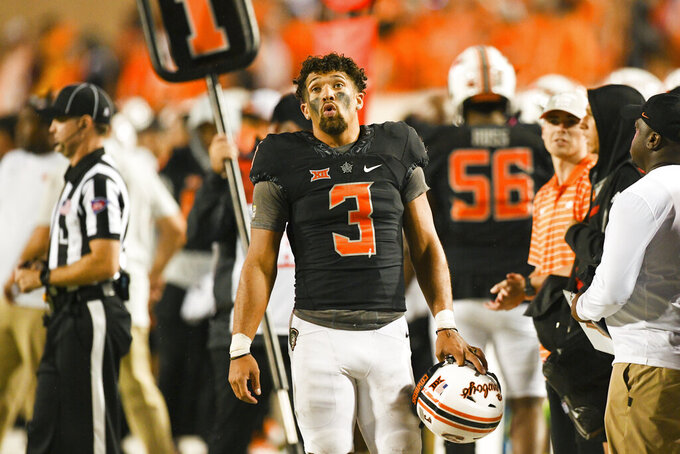 Line: No line, according to FanDuel Sportsbook

Oklahoma State has climbed to No. 8 in the AP Top 25, and although the Cowboys have had some rough moments, they are winning. That's more than can be said for many other teams that entered the season with playoff aspirations. The Cowboys look to keep things moving in the right direction in their final non-conference tune-up before Big 12 play.

Oklahoma State RB Dominic Richardson vs. UAPB's run defense. Richardson ran for 131 yards on a career-high 27 carries in last week's 34-17 win over Arizona State. He's also a threat out of the backfield, with six catches and 52 yards this season. He'll face a defense that has surrendered 163 yards rushing per game.

Arkansas-Pine Bluff: QB Skyler Perry. The senior has passed for 434 yards and three touchdowns in two games while leading the No. 1 scoring offense in the FCS. He completed 10 of 11 passes for 212 yards and two touchdowns against North American last week.

Oklahoma State: QB Spencer Sanders. The senior ranks third nationally in total offense per game (392.5). He passed for a career-high 406 yards in the opener against Central Michigan. He has passed for six touchdowns and rushed for three so far this season.

Oklahoma State seeks its 11th straight home win. ... Oklahoma State coach Mike Gundy is 13-0 in his career against FCS opponents. ... Arkansas-Pine Bluff is coming off a 76-3 win over North American. Ten players reached the end zone for the Golden Lions in their first game with 70 or more points since 1990. ... Braydon Johnson leads Oklahoma State with 10 receptions and 214 yards. ... Oklahoma State defensive end Tyler Lacy has 5.0 tackles for loss.