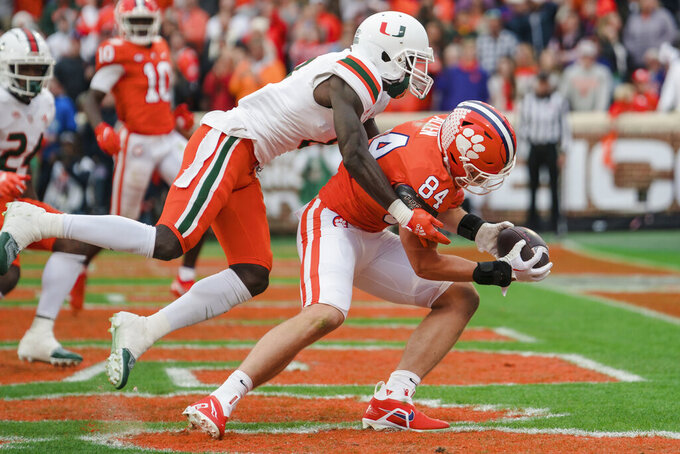 Clemson tight end Davis Allen (84) catches a pass for a touchdown while covered by Miami cornerback DJ Ivey in the first half of an NCAA college football game on Saturday, Nov. 19, 2022, in Clemson, S.C. (AP Photo/Jacob Kupferman)

CLEMSON, S.C. (AP) — DJ Uiagalelei understood entering the season there'd be plenty of doubters ready to count out Clemson getting back on top in the Atlantic Coast Conference.

Instead, the ninth-ranked Tigers finished off a perfect regular-season conference run with a 40-10 victory over Miami on Saturday.

“I think it shows testament to the guys in the program, sticking with it, staying true to ourselves,” Uiagalelei said. “Just coming out each and every game putting in the work and know it'll come out.”

Uiagalelei threw for two touchdowns and ran for a third while Clemson's defense limited Miami to 98 yards, its fewest this season.

Clemson scored touchdowns on three of its first four possessions while Miami (5-6, 3-4) was stuffed by the Tigers defense.

Uiagalelei connected on a 7-yard TD pass to Davis Allen, then ran one in from 8 yards out to lead 14-0 less than 11 minutes in.

“I thought the first half was really clean,” Uiagalelei said. “In the second half, (three) turnovers really killed us.”

Miami had no answers. Freshman Jacurri Brown, who sparked the Hurricanes to a 35-14 win over Georgia Tech last week, was hounded by Clemson's defenders and off target when he was able to throw the ball.

In the second half, Miami took advantage of Clemson's sloppy play to tighten things up. A fourth-quarter fumble by Uiagalelei was returned to the Tigers 10 and backup Jake Garcia tossed a 1-yard score to Kahlil Brantley to cut things to 26-10.

But that's as close as the Hurricanes could come. They'll need a win over Pitt next week to make the postseason in coach Mario Cristobal's debut season.

“Yeah, they did a good job up front. They've got a really good front seven,” Cristobal said. “We didn't get a ton of movement to get the ground game going.”

The Hurricanes ended with 30 yards rushing on 24 attempts.

Uiagalelei completed 22 of 34 throws for 227 yards and an interception. He also led the Tigers in rushing with 89 yards.

Miami: The Hurricanes were overwhelmed early by Clemson on offense and defense. “The U” will likely have to hit the recruiting trail and the transfer portal equally hard this offseason to take steps forward in the ACC.

Clemson: The Tigers looked as good as they have all year in the first half. Then as bad as possible in the second half. Clemson's been chasing consistency all season long and still has not to find it as it closes in on an ACC title matchup with dynamic North Carolina in two weeks.

Clemson will look for its eighth straight win over rival South Carolina next week. The Gamecocks haven't won at Death Valley since a 27-17 win in 2012 when Steve Spurrier was their coach. “Coach always tells us the game is a season of its own,” Clemson linebacker Jeremiah Trotter Jr. said. "We're looking forward to it.

Clemson starting defensive tackle Bryan Bresee missed his fourth game this season, this latest one due to strep throat, Swinney said. Bresee missed a win over Louisiana Tech after the death of his sister, Ella, in September. He also didn't play in victories over North Carolina State and Boston College earlier this season after getting diagnosed with a kidney infection.

Miami closes the regular-season season at home on Saturday against Pittsburgh.

Clemson finishes at home against rival South Carolina on Saturday.