No.13 Arkansas, No. 17 Ole Miss both aim for strong rebound 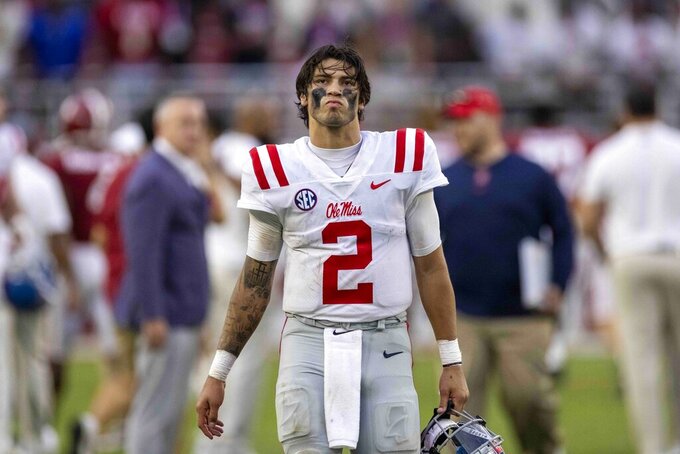 Mississippi quarterback Matt Corral (2) walks off the field after a 42-21 loss to Alabama during the second half of an NCAA college football game, Saturday, Oct. 2, 2021, in Tuscaloosa, Ala. (AP Photo/Vasha Hunt)

Line: Ole Miss by 5 1/2, according to FanDuel Sportsbook.

Both teams are trying to rebound from losses to the nation's top two teams after great starts to the season. The Razorbacks want to get their offense back on track after a 37-0 loss to No. 2 Georgia. The Rebels dropped a 42-21 game at top-ranked Alabama after trailing 28-0 at halftime. The winner can still stake a claim as perhaps the second-best team in the SEC Western Division.

The Ole Miss offense didn't really get it going against Alabama but it still ranks third nationally, averaging 549.2 yards a game and fifth in scoring (44.8 points per game). The Razorbacks defense is ninth, allowing 280.9 yards per game. But they face a huge test in quarterback Matt Corral, wide receiver Dontario Drummond and tailback Jerrion Ealy. Arkansas couldn't stop the run well enough against Georgia, which won despite passing for just 72 yards.

Arkansas LB Bumper Pool leads the stingy defense with 49 tackles, including three for a loss. Pool & Co. face a diverse offense that goes beyond just Corral's big passing numbers. But the Razorbacks do rank second nationally in pass defense, giving up just 129.9 yards a game.

Ole Miss QB Corral was victimized for six interceptions and lost a fumble in last year's loss to the Razorbacks. But he has yet to throw a pick this season and has 16 consecutive games with a passing touchdown, tied for second in program history.

Arkansas is one of four teams in the country with multiple wins against Top-15 teams, joining Alabama, Georgia and Stanford. ... Ole Miss is one of five teams who haven't thrown an interception this season. ... Rebels DE Sam Williams' 1.25 sacks per game leads the SEC and is third in the FBS. He has a sack in every game this season. ... The Razorbacks are seeking their first 5-1 start since the 2011 season. ... Arkansas WR Treylon Burks has a catch in 25 consecutive games. He is one of only four current FBS players to record a reception in every game of his career (minimum 20 games).