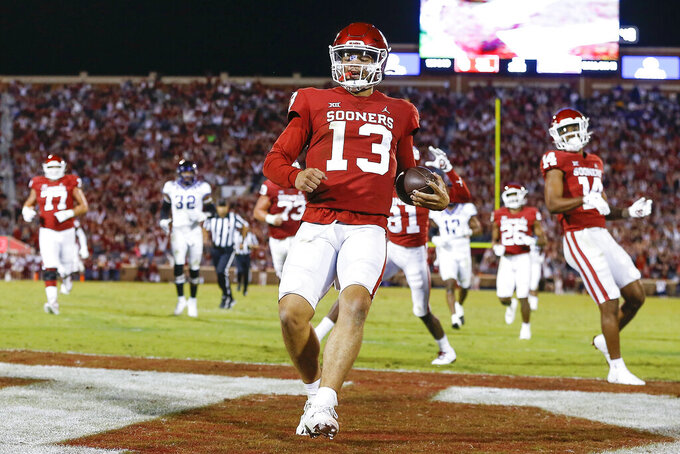 Oklahoma quarterback Caleb Williams (13) runs in for a touchdown during the second half of an NCAA college football game against TCU, Saturday, Oct. 16, 2021, in Norman, Okla. (AP Photo/Alonzo Adams)

Oklahoma quarterback Caleb Williams has started only one game, and just like that, he’s The Associated Press’ pick for the Big 12’s top freshman of the first half of this season.

The 18-year-old's strong arm and swift legs have injected energy into a once-lagging offense that now is purring like usual under coach Lincoln Riley. Williams replaced preseason first-team All-American Spencer Rattler and rallied the Sooners to a 55-48 win over Texas on Oct. 9, then got his first start last Saturday against TCU and threw four touchdown passes and ran for another score in a 52-31 victory.

Riley was impressed with the true freshman's approach against TCU.

“You don’t want guys trying to get out of who they are in these moments," he said. “Don’t try to change, just be confident in yourself and just go be yourself and go play football. It’s really that simple. It’s not easy, but it’s that simple. You've got to block all of the things going on and just try to go play great ball and go enjoy it. I thought he did a good job of staying in the moment, being himself.”

Williams, a five-star recruit from Washington, D.C., has completed 68% of his passes and thrown six touchdown passes without an interception. He also has 18 carries for 215 yards and three touchdowns.

He had won over his teammates long ago, and he solidified his status with how he prepared once he became the starter.

“We already know he’s built for it," Oklahoma receiver Mike Woods said after the TCU game. "Throughout the week, he handled it pretty well, in my opinion. We all know Caleb is talented and has a good mindset towards the game. He just came in and did what he always does. It was no difference.”

Here are the other awards chosen by Associated Press writers who cover the Big 12:

Dave Aranda, Baylor. The Bears went 2-7 last year, but now they are 6-1, with their only loss coming at Oklahoma State.

He said the Bears made a statement with the way they beat then-No. 19 BYU 38-24 last Saturday.

“The ability to intrinsically push yourself and hold your teammates accountable and really bring your best daily — the best will be what we would call our standard, and this was a standard game," he said. "I think that’s a big step in the right direction.”

Bijan Robinson, Texas. One of the most exciting players in college football ranks third nationally with 132 yards rushing per game and third with 162 all-purpose yards per game. He has 10 rushing touchdowns and three receiving scores and averages 6.3 yards per carry.

He has rushed for at least 100 yards in six of his seven games. His season high was 216 yards rushing against TCU. He ran for 135 yards and two touchdowns against Oklahoma State.

“That one is electric and flashy and can cut, make people miss, break tackles and run away from you,” Oklahoma State coach Mike Gundy said.

Malcolm Rodriguez, Oklahoma State. The linebacker is taking full advantage of the extra season the NCAA allowed because of the COVID-19 pandemic, and he has led the Cowboys to a 6-0 record and a No. 8 national ranking. He leads the Big 12 with 10 tackles per game and has forced two fumbles and recovered one. He scored a touchdown against Kansas State on a fumble recovery in the end zone.

Baylor. The Bears were picked to finish eighth in the 10-team league this season, but they are now ranked No. 20. They got onto the national radar with a 31-29 victory over Iowa State on Sept. 29.

Gerry Bohanon, Baylor. Last season, he completed just one pass. This season, he has completed 66% of his passes with 12 touchdown passes and one interception.

Oklahoma State's Jaylen Warren deserves a mention. The Utah State transfer ranks third in the Big 12 in yards rushing behind Robinson and Iowa State's Breece Hall. He ran 33 times for 193 yards in the victory against Texas.

West Virginia. The Mountaineers beat a ranked Virginia Tech squad early this season and took Oklahoma to the final seconds before losing 16-13. Since then, they have lost to Texas Tech and Baylor and fallen to 2-4.

Honorable mentions: Iowa State, which started the season in the top 10 and then lost two of its first four games, and Texas, which blew a 28-7 lead to Oklahoma, then lost at home to Oklahoma State.

Matt Wells, Texas Tech. The Red Raiders are almost bowl eligible at 5-2, yet they are inconsistent (see next item) and have yet to play the upper-half teams, Oklahoma, Oklahoma State, Baylor and Iowa State.

West Virginia coach Neal Brown is dealing with some pressure, too. He is in his third year at West Virginia and has a 13-15 record with games ahead against Iowa State, Oklahoma State and Texas.

Texas Tech QB Tyler Shough. He broke his collarbone against Texas and is expected to miss most of the season. Before his injury, he completed 70% of his passes and passed for 872 yards and six touchdown passes in four games.