Ole Miss out to prove offense can work vs SEC competition 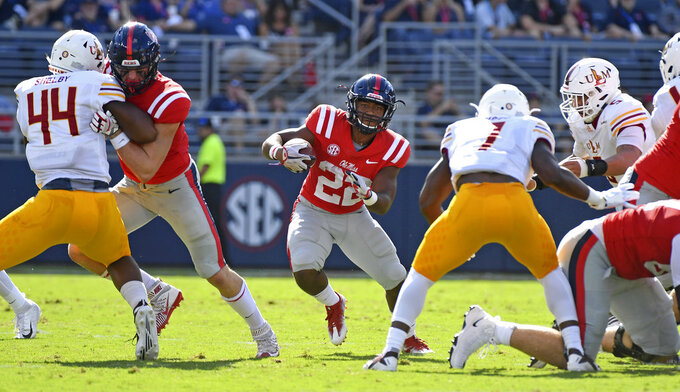 Mississippi running back Scottie Phillips (22) runs the ball during the first half of an NCAA college football game against Louisiana Monroe in Oxford, Miss., Saturday, Oct. 6, 2018. (AP Photo/Thomas Graning)

Mississippi has padded its statistics against nonconference opponents this season, putting up points and yards against usually overmatched opponents at an impressive rate.

The stats are not nearly as good against Southeastern Conference competition.

"You want to go out there and live up to your standard," Ole Miss coach Matt Luke said. "It's not really about who you're playing. It's about playing as good as you can possibly play.

"I think if we take that approach, we'll be better off."

So far, the Ole Miss offense hasn't been effective when playing against conference foes. The Rebels are averaging nearly 58 points per game in four nonconference wins and 11.5 points in two league losses.

There's at least one obvious excuse for that disparity. The Rebels' two SEC games were against No. 1 Alabama and then-No. 6 LSU, which both have some of the best defensive players in college football.

By comparison, Arkansas has struggled on defense, ranking near the bottom of the league in most categories. Ole Miss offensive coordinator Phil Longo said Arkansas' defense isn't as deep as Alabama's or LSU's, but the Razorbacks still have several playmakers in the starting lineup.

"Their front seven is pretty good," Longo said. "They're definitely better than their record."

At times, the Ole Miss offense has looked unstoppable. Jordan Ta'amu is sixth nationally with 1,911 yards passing, A.J. Brown is ninth with 586 yards receiving and Scottie Phillips is 11th with 637 yards rushing.

The Rebels had a school-record 826 total yards in last weekend's 70-21 victory over Louisiana-Monroe .

Ta'amu completed 21 of 24 passes for 374 yards and three touchdowns and the team's three star receivers — Brown, D.K. Metcalf and DaMarkus Lodge — all had at least 100 yards receiving. The Rebels' running game averaged more than eight yards per carry.

Part of the reason for that offensive outburst was because Louisiana-Monroe's defense was simply overmatched. But Longo said the Rebels' mental improvement against the Warhawks is something that can carry over to games against SEC competition.

"I do see it as a step forward, because a lot of those decisions were pre-snap," Longo said. "Post-snap we already know where we're going. It's that time in the twilight zone between them getting the signal and then running the play that they have to assimilate some information about where they want to go."

That growth is encouraging because Ole Miss doesn't have any more nonconference games to build confidence. The Rebels end the season with six straight conference games, starting with Arkansas.

"We've just got to continue to get one week better," Luke said. "The teams that win in October and November are the ones who keep improving. That's important that we do that."