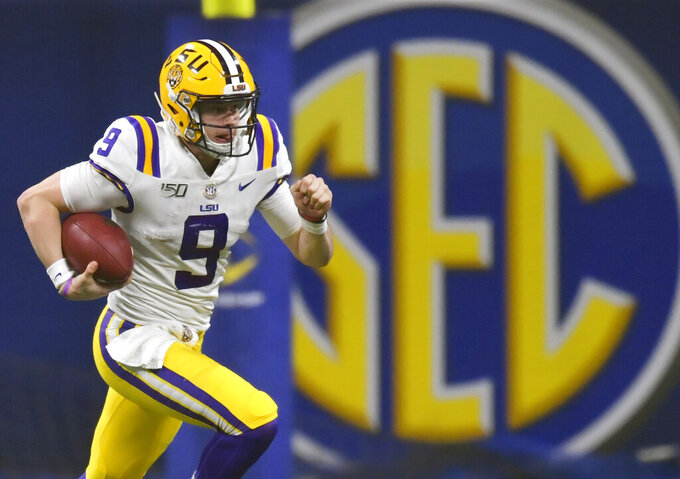 FILE - In this Dec. 7, 2019, file photo, LSU quarterback Joe Burrow (9) runs against Georgia during the second half of the Southeastern Conference championship NCAA college football game, in Atlanta. Burrow is a hero on LSU's Baton Rouge campus, but he hasn't seen much of it because he took graduate courses online. (AP Photo/Mike Stewart, File)

COLUMBUS, Ohio (AP) — Heisman Trophy winner Joe Burrow is a hero on LSU's Baton Rouge campus, but he hasn't seen much of it because he took graduate courses online. Justin Fields rarely has to step inside an Ohio State classroom building because he also does most of his school work online to accommodate his grueling football schedule.

Fields, a sophomore and the Buckeyes’ Heisman Trophy finalist quarterback, said online classes allow him to split his time between studying at home or relaxing with Netflix and the Woody Hayes Athletic Center, where besides football facilities there is a new lavish lounge for players that offers made-to-order meals, massage chairs, video games on big screens and a cryogenic chamber.

“Usually the assignments are all due in the same day so that makes it easier for me,” said Fields, who transferred from Georgia last January.

Online classes are a fact of modern college life. For football players with immense demands on their time nearly year round, working online helps them fit school in when it’s convenient — especially during travel for road games — and to avoid having to mix it up with a bunch of other students clamoring for a selfie for their Instagram. The arrangement also allows them, if they choose, to spend most of their waking hours around teammates and others associated with the football program.

That can be good and bad.

Some administrators interviewed by The Associated Press worry that too much screen time means athletes are not integrating themselves into the community and not getting the full college experience.

“You know, part of (higher education) is the exchange of ideas, collaboration, discourse, hearing criticism from other people and criticizing other people and learning to exchange ideas. I think that all happens within the classroom," said Matt Rhule, head coach at Baylor, which limits online offerings for athletes.

“I think for our football players, the thing we want to do is we want to continue to integrate into the campus community, not continue to pull them out,” he said.

The debate is likely to continue. Of the 46 Power Five conference schools that responded to an AP survey, 27 have no limits on how many online courses athletes may take. A dozen others have few online course offerings or limit how many athletes may take. Just six have no online offerings or prohibit athletes from taking them, including private schools Vanderbilt, Northwestern, Southern California, Texas Christian and Notre Dame. Michigan is the only public school among the Power Five conferences that doesn't offer online learning.

Burrow, who will be a top pick in the NFL draft in the spring, didn’t go to LSU for the college experience. He already had that at Ohio State, where he earned his undergraduate degree in three years. With Dwayne Haskins Jr. likely to start at quarterback in the 2018 season, Burrow opted to take his two remaining years of eligibility elsewhere.

Burrow, who was awarded a master's degree in liberal arts on Friday, acknowledged his laser focus on football in Baton Rouge kept him sequestered. That’s why he decided to spend a few minutes celebrating with fans post game at Tiger Stadium last month.

“I don't go to class. I take online classes so I don't get to see any of those people," he said. “And I kind of just wanted to see them for the first time and just thank them.”

Some players say online work suits them because they can do a lot when they are awake and alert no matter the time of day or night.

“Sometimes I’ll be in class and kind of zone out or something like that, and then totally miss what the teacher says,” Michigan State senior defensive tackle Mike Panasiuk said. “But when I’m focusing and ready to go to work, stuff like that, I’m able to focus and maybe grasp some more things off that. ... There’s studies I guess out there, when you’re doing homework and stuff like that, people are engaged and some people are disengaged in a certain point in time.”

Brian Russell, associate athletic director for academic services and student-athlete development at the University of Illinois, estimates that Illini athletes are taking about 20% of their courses online.

Russell said there is concern among administrators that online classes make it easier for someone other than the player to do the work. He said athletes taking online courses is “a red flag and high-alert area.”

“Just from an industry standpoint, we worry daily and nightly how we monitor academic integrity in online courses,” Russell said. “How are we ensuring students are doing the work themselves? Are we ensuring if they do need additional tutoring or support, how is it their work and not the tutor’s work? There are challenges there that are inherent to the online nature versus the system that we’ve built with compliance in in-person classes.”

That proved to be the case with scandals at Mississippi and Missouri in recent years that involved tutors doing online coursework to keep athletes eligible.

A weekly meeting involves going over every player’s progress in every class.

“It's kind of different from the way we all grew up, not face-to-face but it gives those guys some more flexibility,” he said. “So I think a good mixture of the in-person and also online classes is good.”

At Oklahoma State, many professors have strict attendance policies and don't cut any slack for athletes who have to travel to games, said Marilyn Middlebrooks, associate athletic director for academic affairs. So distance learning is sometimes a perfect fit.

“I get very heated when people make criticisms of online classes,” she said. "It’s simply another delivery system to help students get through schools. Ours are proctored exams, they have cameras on them, the kids understand all of the implications of taking an online class. It’s worked beautifully for us.”