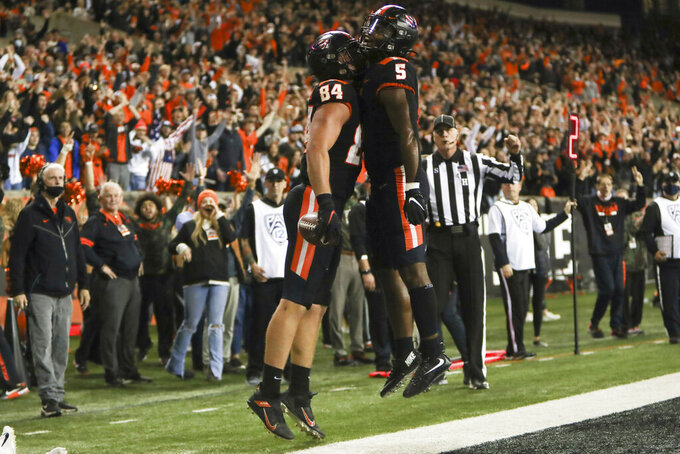 For the Bruins and the Beavers, well, it's been a while.

Both UCLA and Oregon State are bowl eligible this season, ending extended droughts without a postseason appearance.

The Beavers struggled in the ensuing years. Riley went on to coach at Nebraska, and Gary Andersen lasted less than three seasons. Oregon State hired former quarterback Jonathan Smith in late 2017 and the team has improved steadily since.

Oregon State defeated Stanford 35-14 last weekend and the surprising Beavers sit just below leader Oregon in the Pac-12's North Division. The team's mantra this season has been "ain't done yet."

“They definitely enjoyed the win on Saturday night and celebrated amongst themselves. Yesterday, when we met with the team, we talked about how there’s still so much football in front of us, and how there are meaningful games in November, which is what we’ve been working toward," Smith said.

Chip Kelly was on the hot seat in his fourth season in charge of the Bruins, and he still may be, but at least UCLA is going to have a postseason for the first time since 2017 — Jim Mora's last year as head coach.

“I think it’s awesome for those guys that they get to play another game. And the great part about this sport is what you earn and they earned it. I’m very proud of them in terms of what they’ve done. But we’re not done. We still have two regular season games to go and they’re really important games for us," Kelly said.

Oregon, with nine wins and just one loss this season, is of course going bowling. Now it's just a matter of whether the Ducks will make one of the College Football Playoff games.

The Ducks aren't looking ahead, though. They visit Utah (7-3, 6-1) on Saturday in what is quite possibly a preview of the Pac-12 championship game.

As for the Utes, they're already postseason eligible and sitting atop the league's South Division.

Arizona State (7-3, 5-2), which visits the Beavers on Saturday, is also already postseason bound.

Speaking of Washington State, the Cougars need just one more win to become bowl eligible, which would certainly be a welcome achievement given the upheaval of the season.

The Cougars (5-5, 4-3) are playing under interim head coach Jake Dickert after Nick Rolovich was fired over his refusal to get vaccinated against COVID-19.

WSU faces Arizona (1-9, 1-6) on Friday night before visiting Washington for the Apple Cup on Thanksgiving weekend. The Wildcats, under first-year coach Jedd Fisch, sit at the bottom of the Pac-12.

Perhaps no team has had a more dramatic slide than Stanford, which upset Oregon 31-24 in overtime on Oct. 2 but has lost five straight since. The Cardinal have been beset by injuries, including to starting quarterback Tanner McKee, who has missed the last two games.

As a result, Stanford (3-7, 2-6) has already been eliminated from postseason contention.

Bay Area neighbor California (3-6, 2-4) will play USC in an unusual post-Pac-12 championship game on Dec. 4 after its game set for last weekend had to be postponed because of a coronavirus outbreak. The Golden Bears are still technically alive for a postseason bid but they'll need to win out.

Colorado, second to last in the South in front of the Wildcats, can't reach the six-game threshold for bowl eligibility.

The Trojans (4-5, 3-4) can still get six wins with that rescheduled game against Cal and games against UCLA and BYU remaining. USC fired Clay Helton earlier this year and is playing out the season under interim coach Donte Williams.

Washington (4-6, 3-4), which fired coach Jimmy Lake on Sunday, could also get there but needs wins this weekend against Colorado and over rival Washington State in the Apple Cup.