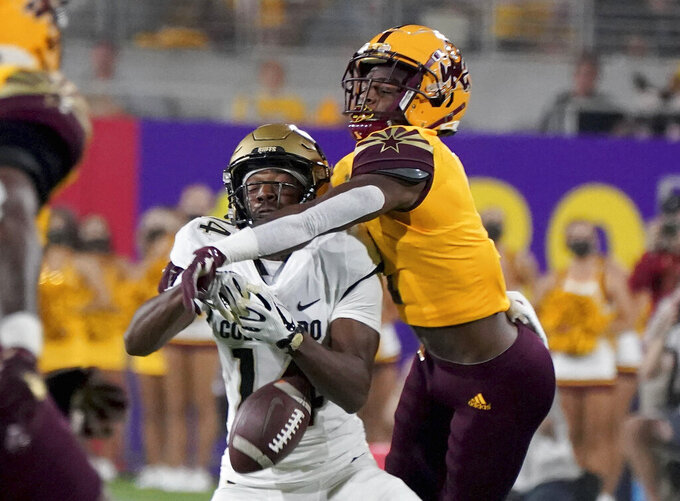 Line: UCLA by 3 1/2, according to FanDuel Sportsbook.

The winner will become the heavy favorite to win the Pac-12 South. Both the Sun Devils and Bruins bounced back from non-conference losses with comprehensive wins last Saturday, as UCLA picked up a 35-24 victory at Stanford while Arizona State had a 35-13 romp over Colorado. All but one of the past five games in the series have been decided by a one-score margin.

Arizona State’s offense against UCLA S Qwuantrezz Knight. The Sun Devils have a variety of productive options at running back, and they’ll get sophomore DeaMonte Trayanum back after missing the past three games because of a sprained ankle. Trayanum averaged 5.9 yards per carry and scored four touchdowns last season, and the bruising 235-pounder could be what it takes to crack the best run defense in the Pac-12. The Bruins are allowing 2.43 yards per carry and 63.75 yards rushing per game, with Knight accounting for 4 1/2 tackles for loss.

Arizona State: QB Jayden Daniels threw an interception, lost a fumble after a botched exchange at the goal line and was sacked five times in a 25-18 loss to the Bruins last season. UCLA has been vulnerable to the pass, allowing a Pac-12 worst 330.3 yards per game.

UCLA coach Chip Kelly is 6-1 in his career against Arizona State. The lone loss came in his first season with the Bruins in 2018. … Sun Devils RB Rachaad White leads the team in rushing yards (262) and receiving yards (187). … UCLA has outscored its opponents 45-9 in the first quarter. … Arizona State has rushed for at least 150 yards in nine consecutive games. … The Bruins have scored at least 35 points in each of their past six games, dating to last season.