Pick Six: In these uncertain times, 'Bama and Clemson again 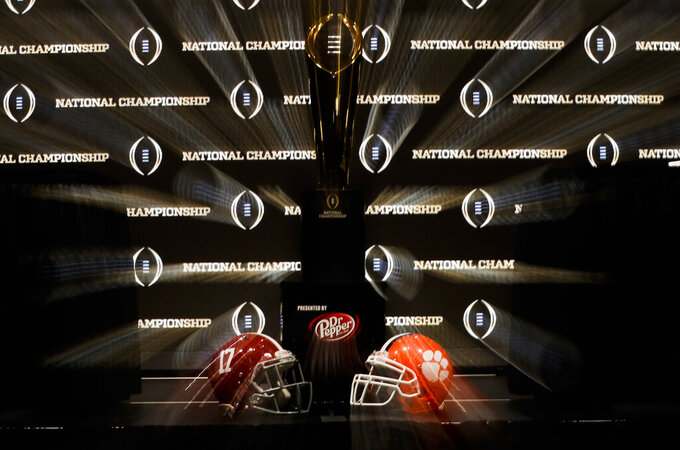 FILE - The championship trophy is seen before a news conference for the NCAA college football playoff championship game between Alabama and Clemson, Sunday, Jan. 6, 2019, in Santa Clara, Calif. In a season of uncertainty, go with the sure things. Alabama vs. Clemson for the fourth time in the title game. (AP Photo/David J. Phillip, File)

Shere are six conferences scheduled to play major college football this fall, and a playoff is in place for January. As of now.

Making predictions for a most unpredictable season is challenging, but everything about playing football is tougher than usual.

And, really, even under normal circumstances, predicting what will happen in a college football season is an exercise in futility. Except for picking Clemson to win the Atlantic Coast Conference. That's pretty easy.

Some other picks as the season really gets rolling:

That's trickier this season because the preseason Top 25 included teams that are not scheduled to play in the fall. When the first regular-season Top 25 is released on Sunday, teams from the Big Ten, Pac-12, Mid-American Conference and Mountain West will not be eligible to receive votes. With 40% of the FBS not playing, there are going to be some teams getting ranked this season that in a normal year would not have made the cut.

With that said, three teams that won't live up to their preseason expectations: No. 6 LSU, No. 15 Oklahoma State and No. 18 North Carolina.

ACC — Clemson over Miami. Transfer QB D'Eriq King brings the Hurricanes' new offense to life, but for the sixth straight season it's the Tigers on top.

American Athletic Conference — UCF over Cincinnati. The American has never had a better chance to push a team into the playoff, but the depth of the league could make it tough for the champion to get through unscathed.

Big 12 — Texas over Oklahoma. The Sooners have won five straight Big 12 titles, but turns out the Texas is back talk came a year too early.

Conference USA — Western Kentucky over UAB. The two best defensive teams in the conference play for the title.

Southeastern Conference — Alabama over Georgia. It will be the second of two meetings for the Crimson Tide and Bulldogs. It's a Tide sweep.

The two-man race between Clemson's Trevor Lawrence and Ohio State's Justin Fields went out the window when the Big Ten postponed play. Maybe the Big Ten gets back in the game soon enough for Fields to get consideration? Or maybe the Heisman voting is put on hold until everybody plays?

For now, let's go with what we know.

Clemson's dominance worked against Lawrence and teammate Travis Etienne in Heisman voting last year, but the ACC could provide some tougher challenges in 2020, including Notre Dame. Also “helping” Lawrence's case this season: Clemson lost its best two receivers from last year's team. The quarterback will get more credit for shining with a talented but mostly unproven group of pass-catchers.

We were all set to declare that coaches were likely to get a mulligan this season as schools take a beating with depleted revenue streams. Then Southern Mississippi parted ways with coach Jay Hopson after the first game.

That's more than likely an anomaly. The economic downturn will decrease the appetite to pay big buyouts. For a coach such as South Carolina's Will Muschamp, what appeared to be make or break season is far less likely to play out that way.

In a season of uncertainty, go with the sure things. Alabama vs. Clemson for the fourth time in the title game with the Tide taking it to draw even at 2-2 (3-2 overall in five CFP meetings). It will be national title No. 7 for Nick Saban, six with the Tide.