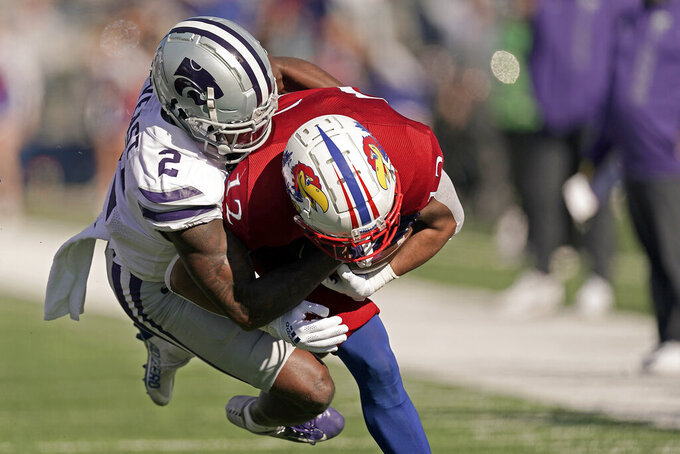 “They're playing their best football of the year,” he said.

If only the Mountaineers could say the same thing.

They were trending in the right direction after back-to-back wins over TCU and Iowa State that evened their record eight games into the season. But they headed home last weekend and were waxed 24-3 by Oklahoma State in a game in which Brown admitted, “There’s not one position that we can talk about that played very well.”

If the Wildcats (6-3, 3-3 Big 12) can turn around their season after three straight losses to open conference, there is no reason the Mountaineers (4-5, 2-4) can't do the same thing as they search for two more wins and bowl eligibility.

“It's a credit to their staff,” Brown said. “They went through a little downturn where they lost three, and they've been able to turn it around. Really their last two games, Kansas and TCU, they won decisively.”

Kansas State coach Chris Klieman acknowledged the pride he felt after a lopsided win over the Jayhawks made the Wildcats bowl eligible. But he also pointed out that there are three winnable games left this season, and finishing strong — beginning with the Mountaineers — is important for the Wildcats to feel good about what they've already accomplished.

“No question I’m happy, especially after starting 0-3 in conference play," he said. "Credit to our seniors. Credit to our leadership to say, ‘We’ve got to take more ownership and we have to hold each other more accountable so that we can be prepared and ready to play every Saturday.’ We’ve been able to do that.”

Kansas State won five straight in the series, including the first four as conference rivals. But the Mountaineers have now won six straight against the Wildcats with their last defeat coming Dec. 5, 2015, in Manhattan.

“It is definitely on our minds, on my mind,” Kansas State quarterback Skylar Thompson said. “It’s definitely been discussed in our team meetings and stuff like that. It’s something to use as some motivation.”

The Wildcats' Felix Anudike-Uzomah picked up his 11th sack of the season against Kansas to take a half-sack lead over Alabama's Will Anderson Jr. for most in the Football Bowl Subdivision. Anudike-Uzomah, who had four sacks against TCU, also leads the nation in forced fumbles after causing his fifth against the Jayhawks.

Kansas State kicker Taiten Winkel has left the team, Klieman said, after he had “an injury and didn't know if he could come back from that.” Winkel had been competing with Chris Tennant, who will now have the full-time job.

The Wildcats nearly brawled with the Jayhawks last week after a cheap shot on Thompson as he was stepping out of bounds in the second half with the game well in hand. It was the second straight week that the senior quarterback had been hit late, and this one was bad enough to knock the wind out of him.

“Proud of our guys to stay away from that and not get any personal fouls or unsportsmanlike,” Klieman said. “Skylar’s good, he’s all right. It wasn’t a good situation, but we came out of it OK."

While the Wildcats are already bowl-eligible, the Mountaineers need to pick up two wins against Kansas State, Texas and Kansas to reach the six-win mark for the second straight year. It's not an insurmountable task, either. The Longhorns (4-5) and Jayhawks (1-8) have losing records and the three of them are 11-16 combined.