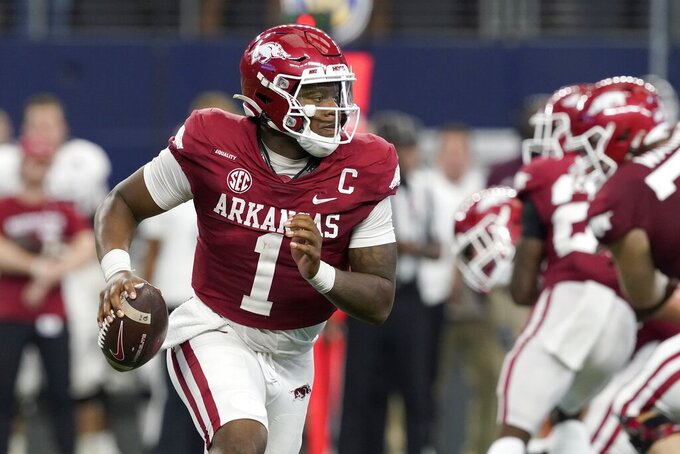 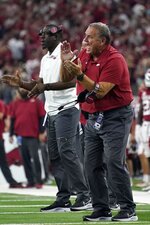 ARLINGTON, Texas (AP) — Sam Pittman, the coach who really wanted the Arkansas job, said he couldn't put into words what a 4-0 start means for the program that not too long ago lost 20 consecutive Southeastern Conference games.

He just knows it shouldn't be that unusual, and that these Razorbacks are a good team.

“I think this is what should happen at Arkansas,” Pittman said.

The Razorbacks made the biggest jump in the new Associated Press Top 25 on Sunday, up eight spots to No. 8 for their highest ranking in 10 years. Arkansas won 20-10 in its SEC opener over Texas A&M (3-1, 0-1 SEC), which dropped eight spots to 15th in the new poll after the end of its 11-game winning streak.

Texas was knocked out of the poll from No. 15 two weeks ago after Arkansas ran over its future SEC foe. The Longhorns have since won 58-0 over Rice, the team the Razorbacks beat by 21 in their season opener, and doubled-up Big 12 rival Texas Tech 70-35 on Saturday.

Next for Arkansas is at trip to second-ranked Georgia next Saturday. The Razorbacks then go to No. 12 Ole Miss and host No. 22 Auburn.

“Wins like this are why you come back,” sixth-year senior linebacker Grant Morgan said after Arkansas ended a nine-game skid to the Aggies. “We saw what this could have been. We saw this was a possibility from last year’s team with Pittman and the crew. I’ll tell you right now, there’s not a single person in that locker room that’s a super senior that says, aw, dang, I wish I would have left."

KJ Jefferson threw two long TD passes, including an 85-yarder to Treylon Burks, as Arkansas jumped ahead 17-0 in just over 16 minutes against an A&M defense that hadn't given up a scoring pass while allowing only 17 total points in its first three games. The Aggies were coming off a shutout victory and hadn't given up a point in seven consecutive quarters.

Arkansas held on when Jefferson missed a big portion of the second half with a bruised knee, though he was in on the final drive converting a first down with a physical run before kneeling down on the final snap.

“Honestly, from the hard work, preparation that we had throughout the summer and spring, it really, I’m not going to lie to you, it really don’t feel like we’re 4-0. It feels like we’re playing our ball, having fun with it,” said Burks, who finished with six catches for 167 yards. “And we’re just going to keep playing our ball.”

The Razorbacks didn't win a single SEC game in the two seasons before the 59-year-old Pittman, who grew up in Grove, Oklahoma, about 75 miles from the campus in Fayetteville, Arkansas. He was Arkansas' assistant head coach for Bret Bielema from 2013-15, then was on Georgia's staff for four seasons before replacing Chad Morris for his first head coaching job at a four-year school.

After going 3-7 in an SEC-only schedule in Pittman's debut last season after no spring drills because of the pandemic, they have already surpassed that win total in Year 2.

“I’m excited to be able to be a part of this group that’s changing the history or changing how the momentum was going in Arkansas football and how we’re starting a new path,” Morgan said. “I’m excited to be able to be in that spot to say younger guys, this is how you win. This is how you continue to win. And we have to continue to do that. Our job is not done.”