Rutgers a big underdog in visit to No. 3 Ohio State 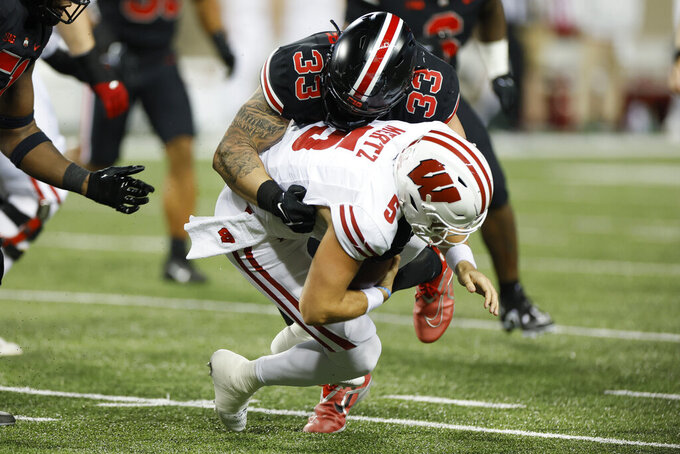 Line: Ohio State by 40 1/2, according to FanDuel Sportsbook.

Ohio State steamrolled Wisconsin last week in its initial Big Ten test. Rutgers, despite its 3-1 start, shouldn't be a monumental struggle for the Buckeyes, who are hitting their stride. The challenge will be getting up for a game against a 40-point underdog. Quarterback C.J. Stroud, a Heisman Trophy favorite, has thrown for 16 touchdowns, tied for tops in the country. Rutgers won close games against Boston College and Temple and blew out Wagner before two costly turnovers led to a 21-10 loss to Iowa, which forced three turnovers as the Scarlet Knights lost their 20th straight home conference game.

Ohio State passing game against Rutgers defense. The Buckeyes are starting fast and burying teams quickly while averaging 58 points in the last three games. They've run the ball and passed it with equal success. The Scarlet Knights' defense has been good, ranking in the top 10 in multiple major categories.

Wisconsin: Evan Simon is the only healthy scholarship quarterback with Noah Vedral and Gavin Wimsatt hurt. He threw for 300 yards and TD last week but also had two interceptions, one of them a 45-yard pick-6.

Ohio State: LB Tommy Eichenberg had 14 tackles — seven solo — and two for losses in the win over Wisconsin. and shared Big Ten Defensive Player of the Week honors. He leads the Buckeyes with 33 tackles, five tackles for loss and two sacks.

Ohio State beat Rutgers 52-13 last year at Piscataway, New Jersey. ... Scarlet Knights coach Greg Schiano was defensive coordinator at Ohio State under Urban Meyer from 2016-18. ... The fewest points the Buckeyes scored in eight wins over Rutgers was 49 in 2015 and 2020. ... Stroud's 207.5 passer rating is second in the nation to TCU's Max Duggan. ... ... Rutgers has had nine different players combine to score 14 touchdowns. ... The Buckeyes scored touchdowns on its first four drives last week after putting up TDs on the first seven drives in the blowout of Toledo. ... Ohio State is playing the last of five straight home games. ... Rutgers is second nationally and first among Power 5 teams in allowing 56.5 rushing yards per game. ... The Scarlet Knights' three blocked kicks are tied for best in the nation.