Rutgers to host Maryland with a bowl berth on the line 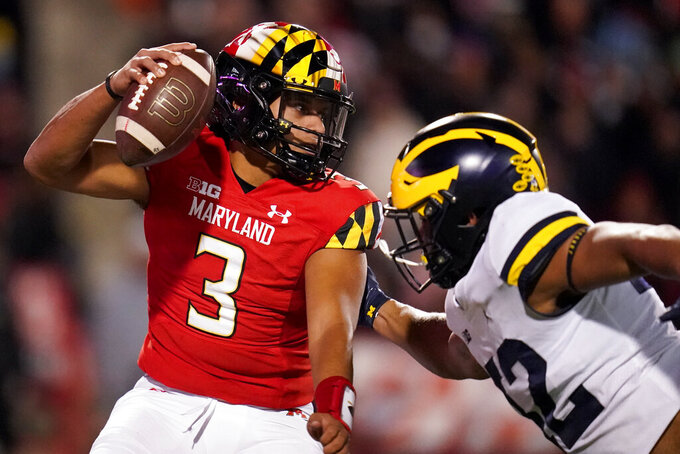 PISCATAWAY, N.J. (AP) — While neither Maryland nor Rutgers have played a postseason game in a while, the two Big Ten Conference schools are going to get a taste of one Saturday.

Maryland has not played in a bowl game since 2016, when it was in the Quick Lane Bowl. The Scarlet Knights last went in 2014, coincidently in another Quick Lane game.

The Terps and Rutgers have had similiar seasons. Maryland opened 4-0 and then lost six of seven after running into Big Ten powers Iowa, Ohio State, Penn State, Michigan State and Michigan.

“We’re still chasing that sixth victory, and we’re out of time,” Maryland coach Michael Locksley said. “I told our team it’s like being in a wild-card playoff game. It’s win or go home. For us, as we talked about taking the next step as a program, obviously one of the first ‘next steps’ is becoming a bowl-eligible team, to where that becomes our standard.”

Rutgers started 3-0 in Greg Schiano's second season back in charge, but it also could not handle the big boys in the league.

Schiano told his team to focus on Saturday and not make the mistake of looking for the prize.

“If that’s your focus, you’re probably not going to get your desired result,” he said. "Our focus has to be on our preparation for Maryland as it is every week for the 11 previous games and really lock in and now with what we call bombs, more bombs going off on the sides. That focus is even more important”

Five things to watch on Saturday.

Maryland’s Taulia Tagovailoa has already set the school’s single-season record for completions. He’s also 216 yards passing behind Scott Milanovich’s record of 3,499 yards passing from 1993. Tagovailoa has thrown for 21 touchdowns this season, five behind the mark set by Milanovich, also in that 1993 season.

Rutgers is hoping to get inside linebacker and leading tackler Olakunle Fatukasi back this weekend. He has missed the last two games after being hurt in the second half against Wisconsin.

Fatukasi has 89 tackles, 11 tackles for losses and 3 1/2 sacks. The Scarlet Knights are also hoping to get fellow linebacker Tyreek Maddox-Williams back. He has been limited to six games. Both are game-time decisions.

Rutgers and Maryland played their first season in the Big Ten in 2014, and they both had winning records overall that year. This is the first time since then that both teams will finish with at least five victories.

“They do a lot of things on offense, like a lot of motions, shifts,” Maryland defensive back Jakorian Bennett said. “They just try to get us to change our defense and stuff like that.”

Rutgers punter Adam Korsak, who leads the nation in net average (45.33 yards), is one of three finalists for the Ray Guy Award along with Matt Araiza of San Diego State and Jordan Stout of Penn State.

Korsak has not bounced an attempt into the end zone for a touchback in 118 consecutive chances dating to the finale of 2019. The 20-game streak is the longest active one nationally.

DOES NOT BODE WELL. OR DOES IT?

Rutgers has lost its last 18 consecutive home games against Big Ten opponents, including three this season against Ohio State, Michigan State and Wisconsin.

The last Scarlet Knights' home win against a Big Ten team was in 2017 — against Maryland.