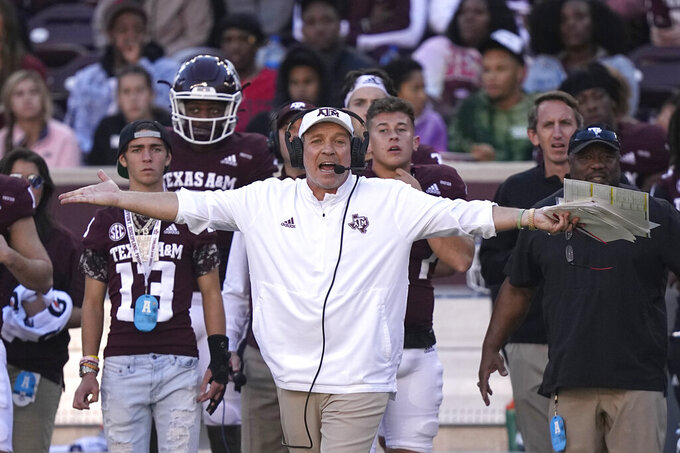 FILE - Texas A&M coach Jimbo Fisher yells to the officials during the first half of an NCAA college football game against Auburn Saturday, Nov. 6, 2021, in College Station, Texas. No. 23 Texas A&M won’t play in the Gator Bowl against Wake Forest on Dec. 31 because of COVID-19 issues and season-ending injuries, the team announced Wednesday, Dec. 22, 2021. “It is unfortunate, but we just don’t have enough scholarship players available to field a team,” Texas A&M coach Jimbo Fisher said in a news release. (AP Photo/David J. Phillip, File) 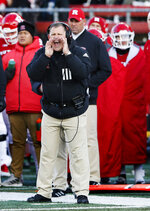 With less than a week to prepare, Rutgers coach Greg Schiano is going to keep No. 20 Wake Forest in the dark when it comes to who will be playing for the Scarlet Knights in the Gator Bowl on Friday.

Schiano declined on Monday to provide information on team testing for COVID-19 in the past 48 hours. He also refused to say whether any of his players who signed with an agent for the NFL draft and wanted to play in the bowl game got an exemption from the NCAA. He wouldn't even say whether star punter Adam Korsak would be able to make it back from Australia in time for the game in Jacksonville, Florida.

“I’d rather show up Friday with our team and let it rip,” Schiano said Monday in a Zoom call. "Can we do that?"

When Schiano noticed a writer shaking his head, he laughed.

It seems Schiano is just trying to level the playing field for Rutgers (5-7) in its first bowl appearance since 2014 and first as a member of the Big Ten. The Scarlet Knights accepted a late bid on Thursday to play in the game after Texas A&M withdrew because of manpower issues associated with COVID-19, injuries, opt-outs and player transfers.

Players started arriving back at school on Christmas night and slept in their own beds, Schiano said. They took part in a meeting on Sunday and had a walk-though workout.

Schiano is not going to work his players as hard as he would in a normal week leading to a game, having last played two days after Thanksgiving in a loss to Maryland.

“We’re built to do this. Let’s just roll with the punches,” he said. “Whatever comes down the pike we'll adjust and let’s see if we can get down there and go play a game and have a lot of fun doing it and, you know, win the game. That’s why we’re going there, right?”

The only thing up in the air is how Rutgers is going to get from New Jersey to Florida. The team was having a tough time finding a charter flight and nothing was set on Monday. Schiano quipped there was a day the Scarlet Knights had two planes available and then lost both. He added that a train ride remains a possibility, even a bus. He promised the team will get there.

Schiano said his players have taken a great approach this week.

“They’ve been awesome,” he said. “I’ll tell you, they are so much fun to be around right now. They’re fired up. They thought they were done playing or they thought they were going to another league to play. And now they’re back with their buddies and they’re practicing. It’s really an exciting thing for us.”

Rutgers is going to be a big underdog. After opening the season with three straight wins, the Scarlet Knights went 2-7 the rest of the way.

They got a bowl bid with a losing record because NCAA rules allow teams with 5-7 records to be bowl-eligible if there are not enough six-win teams to fill all the spots. The 5-7 team with the highest Academic Progress Rate score has first crack at an open slot, and Rutgers was atop that list.

Schiano took Rutgers to six bowls in his first tenure at the school from 2001-11. He doesn't see this game in the second year of his second tenure as a no-lose situation.

“If we’re going to play a game and they’re keeping score, we’re going there to win this," he said. "There’s no such thing as no lose because if our numbers are smaller than their numbers, we definitely lose. And it’s going to hurt a lot.”