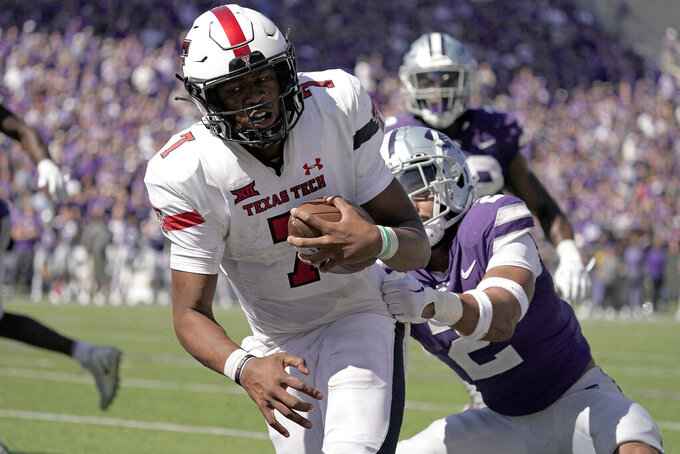 Texas Tech quarterback Donovan Smith (7) is chased into the end zone by Kansas State safety Kobe Savage (2) as he scores a touchdown during the second half of an NCAA college football game Saturday, Oct. 1, 2022, in Manhattan, Kan. Kansas State won 37-28. (AP Photo/Charlie Riedel)

Oklahoma State got off to a good start in Big 12 play with a 36-25 victory at then-No. 16 Baylor. The seventh-ranked Cowboys are positioned for a run at a playoff spot, and quarterback Spencer Sanders could become a more prominent part of the Heisman Trophy conversation if he continues to perform well. Both possibilities would take a hit with a loss to Texas Tech on Saturday. Tech, which already has wins over ranked opponents Houston and Texas this season, could crack the Top 25 with a victory.

Texas Tech: RB Tahj Brooks. He has rushed for 209 yards and four touchdowns and caught 19 passes for 105 yards and a score. He platoons with SaRodorick Thompson to form a productive duo.