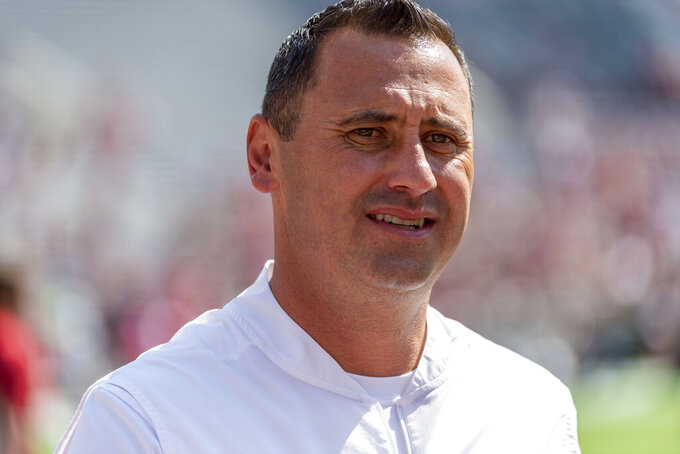 Tom Herman started the 2021 Texas recruiting class. Steve Sarkisian is finishing it up, and the new Longhorns coach can still sign a few more players.

Sarkisian inherited a group of 19 signees recruited by Herman before the coaching change in January, then Wednesday added a group of four more players that included senior transfer linebacker Ray Thornton from LSU. Sarkisian noted he’s got four scholarships left to offer if a player emerges in the transfer portal in the coming months.

“All in all, I think we did a really good job in the 2021 class, leaving us some wiggle room and filling some needs," said Sarkisian, the former Alabama offensive coordinator who was part of the Crimson Tide's national championship victory Jan. 11 after being named the new Texas coach within hours after Herman's firing.

The Longhorns came up short of having the Big 12's top recruiting class for the fourth year in a row. They are second behind Oklahoma for the first time since the Sooners last had the league's top class in 2017, according to rankings by 247Sports.

Oklahoma was successful during the early signing period in December, and also added five transfers, three from Tennessee. That left the six-time defending Big 12 champion Sooners in good shape before what used to be the traditional signing date.

“With the guys we brought in (via transfer), it made today pretty easy,” Sooners coach Lincoln Riley said. “We didn’t send out one NLI (national letter of intent). We pretty much, we knew we weren’t going to sign another high school player once the transfer portal shook out the way that it did.”

Like Sarkisian at Texas, Riley still has room to add some transfers.

While the Longhorns went 32-18 in four seasons with bowl victories each season under Herman, and had the conference's top recruiting class the past three seasons, that didn't translate into a Big 12 title. They made only one league championship game appearance, and they last were conference champs in 2009.

Sarkisian said he spent some time getting to know the players who had signed with Herman, and building some immediate trust with them.

“You try to give them a feel of who you are and what you’re about,” Sarkisian said. “They made the commitment and they signed with the university of Texas. We wanted to reassure them that they had a home here. ... I think all the kids that signed in December feel great about being here.”

Iowa State, coming off its first Big 12 championship game appearance last season, got a big late add to its 2021 class with the signing Wednesday of four-star running back Eli Sanders from Chandler, Arizona.

Sanders, ranked the nation's 18th-best running back by Rivals, ran for 1,377 yards and 23 touchdowns in 10 games as a senior when Chandler High won its second consecutive state title.

The Cyclones signed 18 players in the early signing period in December, right after their 8-1 record in the Big 12 that was the best in the league.

Oklahoma's signing class that ranked as best in the Big 12 checked in 11th nationally. It is the first time since 2014 that the conference doesn't occupy one of the top 10 spots in the 247Sports team rankings.

Texas was 17th, with the next-best from the Big 12 being Oklahoma State at 39th.

As for the rest of the Big 12, West Virginia was fourth among league teams, followed by Baylor, Kansas, Kansas State, Iowa State, TCU and Texas Tech.

You wouldn’t think Kansas is coming off a winless season by looking at their recruiting haul.

Jayhawks coach Les Miles managed a class that includes quarterback Conrad Hawley, the top prep player in the Kansas City metro area last season, and got a big boost Wednesday with the late addition of Quaydarius Davis, a four-star prospect from Dallas.

The Jayhawks also added offensive lineman Colin Grunhard, who grew up in Kansas City before walking on at Notre Dame and earning a scholarship. He is the son of former Chiefs star and ex-Jayhawks assistant Tim Grunhard, and is already on campus.

Among five signees added Wednesday by TCU, pushing it class to 20, was freshman dual-threat quarterback Chandler Morris, a transfer from Oklahoma. He appeared in five games as a true freshman for the Sooners last year, and had a 2-yard TD run in the Big 12 championship game.

Morris, who was 27-2 as a starter and accounted for 125 touchdowns in his final two prep seasons at Highland Park High in Dallas, is the son of former Arkansas and SMU head coach Chad Morris.

The Horned Frogs also lost an in-conference transfer, with senior offensive lineman TJ Storment among five Power Five transfers to Texas Tech already enrolled on the Lubbock campus. The only addition Wednesday to the Red Raiders' 17-player signee class was defensive back Imari Jones from Coronado High in Lubbock.

Kansas State hopes to have back quarterback Skylar Thompson after he missed most of last season with an injury, thanks to the COVID-19 rules that gave players an additional year of eligibility. But they may have found his replacement in Jake Rubley, a four-star prospect from West Des Moines, Iowa, and one of the best pro-style quarterbacks in the country.