SMU, TCU get 100th edition of rivalry after waiting a year 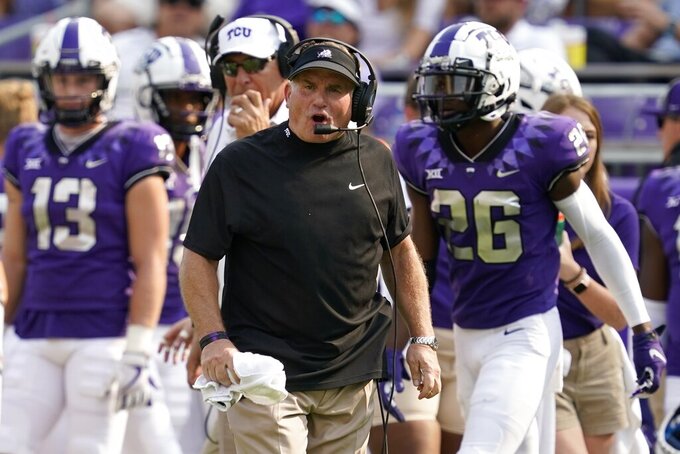 TCU head coach Gary Patterson instructs his team in the second half of an NCAA college football game against California in Fort Worth, Texas, Saturday, Sept. 11, 2021. (AP Photo/Tony Gutierrez)

FORT WORTH, Texas (AP) — Regardless of why SMU and TCU couldn't find a way to pull off the 100th meeting between the Dallas-Fort Worth rivals last season, it's happening a year later.

Maybe it was a big deal last year because it was just the second time in almost 100 years the schools didn't meet when they could have (SMU didn't play football in 1987-88 because of sanctions from the NCAA's so-called death penalty).

Maybe the “Iron Skillet” game needed a little spice, which Mustangs receiver Rashee Rice provided. Spurned in recruiting by the FBS school closest to his high school campus north of Fort Worth, Rice said the Horned Frogs were afraid to play the team that wanted him.

TCU offensive lineman Wes Harris isn't buying that, but the senior does remember the most recent meeting. SMU beat then-No. 25 TCU 41-38 in September 2019, ending a seven-game skid in the series with just the third win for the Mustangs over the Frogs since 1998.

“It was tough because it was the first time since I was here that we lost to SMU and it was the first time I’ve seen TCU lose to SMU in a while, too,” Harris said. “I think most of our roster probably wasn’t even here yet because we got a lot of young guys. We’ve definitely been thinking about it awhile and we’re excited to go out there and getting a shot to bring the Skillet home.”

TCU couldn't play its opener and only scheduled non-conference game last year because of COVID-19 issues throughout the program. The schools tried to reschedule it, but ultimately had to issue a joint statement saying they couldn't make it happen.

Now SMU is trying to build on a third consecutive 3-0 start under coach Sonny Dykes while seeking back-to-back victories over TCU (2-0) for the first time since 1992-93.

It's the first meeting with a Big 12 opponent for SMU since the American Athletic Conference member wasn't among the four teams invited to join the Big 12. The league decided to expand after Texas and Oklahoma said they were bolting for the SEC.

“When you play a team that’s in the Big 12, that helps, but the most important thing is figuring out how to win football games and the longer you do that, the more respect you get,” Dykes said. “If you want to be a big-time program, you’ve got to win some big-time games, so that’s what we’re striving to do.”

TCU coach Gary Patterson was in his sixth season in charge of the Horned Frogs when the rivalry was skipped in 2006. Other than the two “death penalty” years, the two interruptions under Patterson are the only ones since 1925. TCU leads the series 51-41-7. A third straight victory to start this season likely would get TCU back in the Top 25.

“For us, it’s to get to 3-0, keep climbing the mountain, the goals of getting where we want to get to as a football program,” Patterson said. “And so SMU is the next one.”

SMU quarterback Tanner Mordecai leads the nation with 16 touchdown passes, capped by his 33-yard Hail Mary to Reggie Roberson Jr. on the final play for a 39-37 victory at Louisiana Tech, where Dykes' college head coaching career started in 2010.

“I don’t care too much about all of those stats,” said Mordecai, an Oklahoma transfer who played high school football in Waco, about 100 miles south of Dallas. “I wouldn’t care if we had 16 rushing touchdowns right now. All that matters is we’re 3-0, and I think we’re building as an offense and we’re going in the right direction.”

TCU quarterback Max Duggan became just the second true freshman to start at quarterback in Patterson's 21 seasons as head coach in the 2019 loss to SMU. While he completed just 44% of his passes (16 of 36), Duggan threw for three touchdowns, a career high he matched for the second time in the 34-32 victory over California two weeks ago.

It's the final non-conference game for both teams. SMU is trying to extend an 11-game non-conference winning streak in the regular season. It's the longest since the Mustangs won 17 in a row in the “Pony Express” days, from 1979-85. Two of Patterson's four non-conference home losses in 21 seasons have been to SMU.