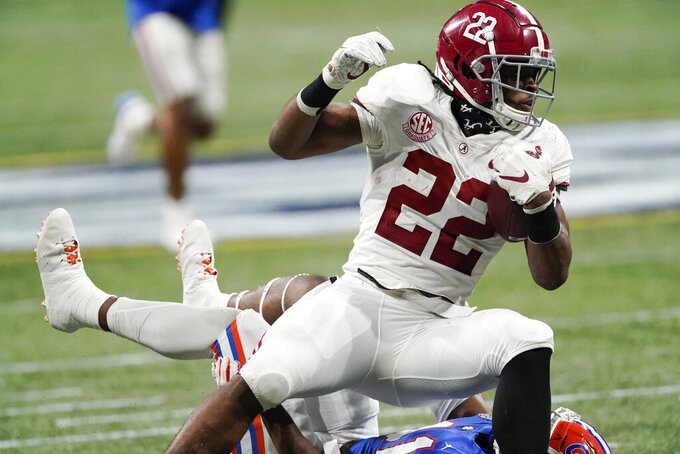 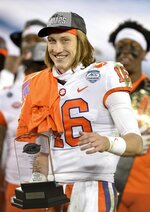 It should come as no surprise to see Alabama and Clemson fill the top two seeds in the College Football Playoff.

Although LSU broke through to earn the national title last season, either Alabama or Clemson has still won 12 of the last 15 playoff games. The exceptions are LSU’s two playoff wins last year and Georgia’s Rose Bowl semifinal triumph over Oklahoma during the 2017 season.

Both teams flexed their muscles in winning their respective conference championship games.

Alabama’s 52-46 Southeastern Conference championship game victory over Florida marked the 24th straight game in which the Crimson Tide scored at least 35 points, the longest such streak in major college football history. Alabama has shattered the old record held by Oregon, which scored 35-plus points in 15 straight games from November 2011 to November 2012.

The last time Alabama was held below 35 points came in a 44-16 loss to Clemson in a CFP championship game to cap the 2018 season.

The Tigers avenged a 47-40 double-overtime loss at Notre Dame by reversing the rushing deficit they faced in their first meeting. After getting outrushed 208-34 at Notre Dame, Clemson outrushed the Irish 219-44 on Saturday.

From Archie Griffin to Eddie George, Ohio State has produced plenty of stellar running backs during its storied history.

But none of them ever had quite as prolific a rushing performance as Trey Sermon delivered Saturday with the Buckeyes’ playoff hopes on the line.

Sermon’s 331 yards rushing in a 22-10 Big Ten championship game triumph over Northwestern broke the single-game school record previously owned by George, who ran for 314 yards against Illinois in his Heisman Trophy-winning season of 1995.

That 331-yard performance also was the highest rushing total for any conference championship game ever.

But this is the first Oklahoma team to win a conference title after starting out 0-2 in league play. The Sooners have won seven straight since falling to Kansas Stat and Iowa State early in the season.

Clemson and Oklahoma are the first teams in any active conference to win six consecutive league titles outright. Oklahoma won 12 straight outright league titles from 1948-59 in the Big Eight, which no longer exists.

While Clemson and Oklahoma have made conference titles an annual event, San Jose State and Ball State got to celebrate for the first time in decades this weekend.

San Jose State’s 34-20 victory over Boise State in the Mountain West Conference championship game gave the unbeaten Spartans their first league title since finishing the 1991 season as the Big West co-champions. They won the Big West outright in 1990.

San Jose State and Ball State will face off in the Arizona Bowl on Dec. 31. San Jose State is seeking to complete its first unbeaten season since a 13-0 finish in 1939.

Mercurio made four second-quarter field goals, as he connected on kicks from 24, 36, 26 and 32 yards out. He became the fifth FBS player to make four field goals in one quarter. The last person to do it was Oregon State’s Jose Cortez against California in 1998.

One more statistical note on San Jose State's milestone victory: Cade Hall recorded two sacks in that game to increase his season total to 10, putting him in a tie for the FBS lead in total sacks.

The only other FBS player with a double-digit sack total this year is Tulane's Patrick Johnson, also with 10.

Ball State won the MAC championship by limiting Buffalo's Jaret Patterson to 47 yards on 18 carries. Even after that pedestrian performance, Patterson still owns the FBS rushing lead by over 16 yards per game.

Patterson has run for 1,072 yards and averages 178.67 yards per game. Colorado's Jarek Broussard ranks second with 162.6 yards rushing per game.

LSU and Mississippi weren't playing for a conference title Saturday, but they still produced a thriller that resulted in an SEC record for Tigers receiver Kayshon Boutte.

Boutte accumulated 308 yards receiving in LSU's 53-48 victory to set an SEC single-game mark. The record had been owned by Cobi Hamilton, who had 303 yards receiving for Arkansas in a 2012 loss to Rutgers.