Syracuse grappling with injuries as it slides in the ACC 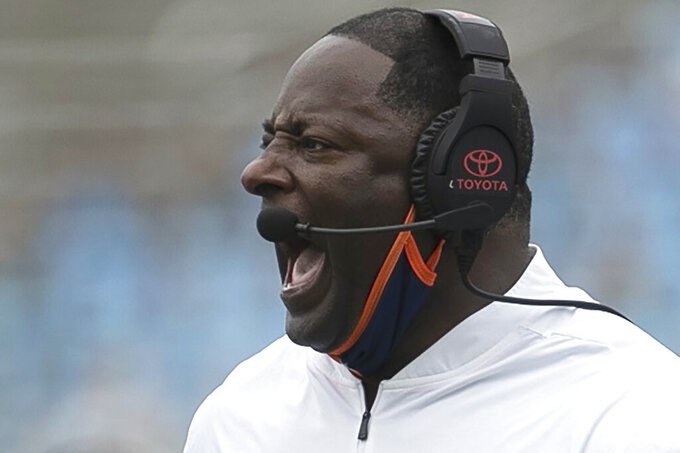 FILE - In this Sept. 12, 2020, file photo, Syracuse head coach Dino Babers argues a call with the officials in the second quarter of an NCAA college football game against North Carolina, in Chapel Hill, N.C. Babers is in the midst of a second straight subpar season and not much relief is in sight. (Robert Willett/The News & Observer via AP, Pool, File)

Syracuse is struggling in this most difficult of seasons as injuries pile up and inexperienced players fill lineup holes where needed.

Orange coach Dino Babers now is faced with the prospect of finishing the season without two of his most important players — defensive standout Andre Cisco is already out for the remainder and starting quarterback Tommy DeVito could join him.

Cisco, a preseason, first-team AP All-American safety from Long Island who entered the season with 12 interceptions, most in the Bowl Subdivision, suffered a lower body injury in pregame warmups before a win over Georgia Tech just over two weeks ago and is out for the season. DeVito, a redshirt junior from New Jersey, suffered an injury to his left leg when sacked in the fourth quarter — for the fifth time in a 38-24 home loss to previously winless Duke on Saturday — and had to be helped from the field by two staff members. He finished the game watching from the sideline with a boot on the injured leg and leaning on crutches.

Not a good omen.

“Football's physical, and that's the part that makes it different from other sports. It's the part that you embrace,” Babers said Monday. “We understand that people are going to get hurt and that next guys have to step up. It's what makes the game unique. We accept that part of it.”

Against Duke, Syracuse (1-3, 1-3 Atlantic Coast Conference) started five freshmen (redshirt or true) on defense — including Rob Hanna at rover in place of Cisco — for the first time in program history on either side of the ball. And the Blue Devils took advantage of that youth, rushing for 363 yards behind Deon Jackson (169) and Mataeo Durant (163), who both attained career highs and ripped off big gainers. Jackson had a 50-yard run and Durant a 48-yarder in the first half, shedding tacklers along the way.

“We had some missed tackles on the back end, we had some missed tackles on the front end, we had some defensive linemen that got tired of running into things that are bigger,” Babers said. “That’s the whole physicality part of it. When you start slowly getting tired or not hitting those gaps the way you’re supposed to hit them, they’re going to start bleeding yardage on you. It’s difficult when you’re at that young age to be able to bang with some of those guys that are older. We have to match that physicality. We have to dig down deep.”

The performance on offense led by Clemson transfer Chase Brice at quarterback enabled Duke to hold the ball for 102 plays — 50 more than Syracuse — and nearly 40 minutes. Still, the Syracuse defense forced four turnovers to boost its season total to 14, tops in the nation, and scored on a fumble recovery. But the offense failed to score off any of the other three Duke miscues, most notably when DeVito was stopped on a fourth-and-1 deep in Duke territory early in the second quarter. Syracuse was outgained 645-286 and its run game sputtered with 28 yards on 23 attempts, the third time in four games the Orange have averaged under 2 yards a carry.

Syracuse began the season with road losses to North Carolina and Pittsburgh before breaking through against Georgia Tech, 37-20. The Orange will try to rebound again when they host undefeated Liberty (4-0) on Saturday, the lone non-conference game of the season for Syracuse. Then it's on to top-ranked Clemson.

“If you didn’t think this was going to be a different type of year you were pulling the wool over your eyes,” Babers said. "For those who survive, they’ll be stronger than ever. The whole thing is not to quit, not to give up, keep your knees bent and be ready to adjust and improvise ... and when the smoke clears still be standing.

"There’s some pride in still standing when this thing’s all over cause it’s been a wild, wild ride.”