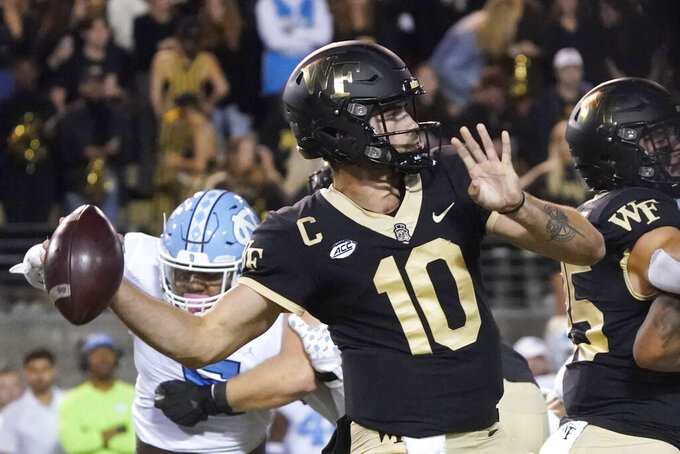 This is a matchup of two teams that have gone from strong starts and AP Top 25 rankings to struggling entering the final two weeks of the schedule. The Demon Deacons have lost three straight games since peaking at No. 10 nationally, their first such league skid in a season since 2017. The Orange have lost four straight since starting 6-0 and hitting No. 14 in the AP poll.

Syracuse QB Garrett Shrader vs. Wake Forest's defense. Shrader looked rusty in his first game in two weeks in a 38-3 loss to Florida State. But the Demon Deacons are 12th in the 14-team ACC against the pass, allowing more than 252 yards a game through the air.

Syracuse: K Andre Szmyt is closing in on several career ACC scoring and kicking marks. Szmyt has 433 career points for fourth on the league's all-time list. He's third among kickers, 33 points away from matching Florida State's Dustin Hopkins from 2009-12.

Wake Forest is bowl eligible for the seventh straight year. ... Syracuse qualified for the postseason for just the second time in the past nine years. ... A.T. Perry leads the Demon Deacons in receiving yards with 774 through 10 games, while Jahmal Banks has a team-high eight touchdown grabs. ... Syracuse scored 30 or more points in its first three games this season. The Orange have gone past 24 only once in the seven games since. ... Wake Forest quarterback Sam Hartman has 100 career touchdown passes. That's second in league history behind only Clemson's Tajh Boyd (107). ... Syracuse QB Shrader and RB Sean Tucker have combined for 40 touchdowns when playing together, the fourth-best passer-runner combo in school history. ... The Demon Deacons lost 11 turnovers and gave up 12 sacks in losses at Louisville and North Carolina State, but cut that to one sack and one turnover in last weekend's loss to North Carolina. ... Syracuse has lost just 16 turnovers this season.