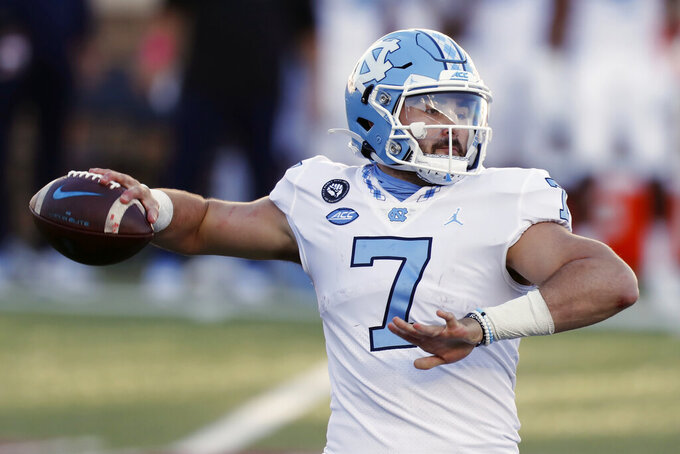 FILE - In this Oct. 3, 2020, file photo, North Carolina quarterback Sam Howell passes during the first half of an NCAA college football game against Boston College in Boston. Howell is back for his junior season while leading an offense with major personnel losses. The Heisman Trophy candidate and top NFL prospect has spent spring practices working to improve timing and chemistry with new receivers to help the offense take shape. (AP Photo/Michael Dwyer, File)

The new challenge is keeping the Tar Heels’ offense rolling despite major personnel losses around him. The first steps have come during spring practices, where Howell has focused on being a leader for players getting their first shot at leading roles.

“The big thing for me coming in was just trying to get timing down with these new receivers and new backs, and just kind of get a feel for the offense,” Howell said. “Because I’ve been with the same players my first two years here, and it’s a completely different offense now – a lot of new faces playing.”

The Tar Heels hold their spring game on Saturday, a step in Howell's efforts to build the chemistry that came so easily the past two seasons amid scoreboard-stressing outputs.

The losses are significant. They include the elite 1-2 punch of 1,000-yard rushers in Michael Carter (1,245 yards) and Javonte Williams (1,140 yards), with Williams finishing fourth in the Bowl Subdivision ranks with 22 total touchdowns and both ranked in the top six nationally in rushing. UNC also lost a 1,000-yard receiver in Dyami Brown (sixth in FBS with 1,099 yards) and Dazz Newsome, who cracked the 1,000-yard mark in 2019.

That means Howell will rely on new players just about anywhere he delivers the ball.

“I think this year my leadership will really be challenged because we’ve got a lot of young guys that are going to have to step up and play,” Howell said. “So I’m trying to take those guys under my wing and kind of develop those guys into players that can play on the field this fall.”

Coach Mack Brown, entering Year 3 of his second stint with the program, compared it to his first year back in Chapel Hill. There was inexperienced talent with the running backs while the receivers were still inconsistent and battling drops.

The difference is Howell was a true freshman settling into college back then. Now he’s one of the nation’s top quarterbacks, showing the confidence to push the ball downfield and a soft touch on defense-stretching deep balls.

Howell threw for 3,586 yards and 30 touchdowns last season, finishing in the top six of the FBS ranks in both categories. He's already tied UNC's career record for TD throws (68) entering his junior season.

Downs, in particular, has a big opportunity. He had two touchdown catches, one for 75 yards, in the Orange Bowl loss to No. 5 Texas A&M after Brown opted out and declared for the NFL draft.

“As a group, we want to make huge plays and keep working,” Downs said. “For myself, I want to better myself, get Sam’s trust that even though Dyami and Dazz are gone, he’s still got dudes to throw the ball to.”

The team has used spring team drills to get closer looks at younger players, allowing Howell more time to observe who is doing well or needs some informal coaching.

That's exactly what Mack Brown wants from the guy who makes the Tar Heels’ offense hum.

“If you don’t have a quarterback, it’s really, really hard. And we’ve been so blessed. … There’s absolutely no doubt the fact that we’ve got Sam Howell gives us some margin of error until those guys can grow up.”