Taylor scores 5 TDs to lead No. 8 Wisconsin past Kent State 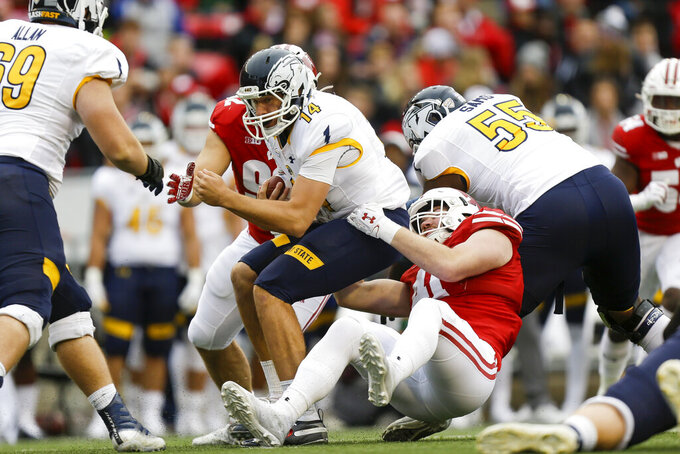 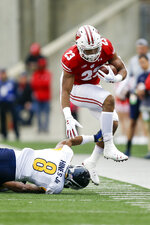 MADISON, Wis. (AP) — A team with a good running back and a stout defense is tough to beat. Just ask Kent State coach Sean Lewis.

Following a 48-0 loss Saturday at No. 8 Wisconsin, the 33-year-old Lewis, who played quarterback and tight end for the Badgers from 2004-07, said Wisconsin has the best running back, the best offensive line and the best defense in the country.

Jonathan Taylor had a career-high five touchdowns (four rushing and one receiving), Zack Baun had three of the Badgers' nine total sacks, and the eighth-ranked Badgers coasted to a second 5-0 start in three seasons. Wisconsin started 12-0 in 2017 before losing to Ohio State in the Big Ten championship game.

"It's the culture and the foundation they've established for a very long time," Lewis said of Wisconsin. "Their ability to run the football, to dictate the pace of the game. For them to have 75 snaps, for us to have 45 (snaps), that's what they want to do. They want to play the game at their pace, their style of play and really dictated some things."

"It's still a long season ahead, and to be consistent, you've got to play through a whole season knowing that you can't just have a couple games," Taylor said. "There's still a long way to go, but I'll continue to try and be as efficient as possible."

Baun's career-high three sacks led a Wisconsin defense that has now pitched three shutouts in a season for the first time since 1937. The Badgers, who entered the day with the nation's top-ranked defense, held Kent State (2-3) to 124 yards of total offense. Jack Sanborn had two sacks and Chris Orr, the Big Ten Defensive Player of the Week for his efforts against Northwestern, also added a pair of sacks for a unit that has allowed four touchdowns through five games.

"Guys are playing with more confidence," Orr said. "Guys are really glued in to their alignment and assignment. ... We're not reinventing the wheel."

Dustin Crum and Woody Barrett combined for just 64 yards on 10-of-17 passing. Most of those yards came on a 28-yard completion to receiver Raymond James.

"Dustin Crum is our starting quarterback," Lewis said. "He will continue to start and lead us. But those guys will continue to push each other on a daily basis and kind of like the running backs, they're sharing the workload and making sure that we understand the big picture here."

The Golden Flashes have played two ranked opponents this season and were outscored 103-16 in those matchups. Kent State lost to then-No. 8 Auburn 55-16 on Sept. 14.

Taylor scored from 6 yards on the opening drive. The junior running back now has a touchdown on each of the Badgers' five opening drives this season. Wisconsin is the only team in the FBS to open each game with a touchdown.

"It's awesome. It never gets old," Wisconsin coach Paul Chryst said of watching Taylor play. "And you know — I know it and we know it; guys are talking on the sidelines — he's special. To be able to see it, it's pretty neat."

Taylor scored four first-half touchdowns before the Golden Flashes had their third first down. Taylor crossed the goal line on 19-, 4- and 48-yard runs. Taylor and quarterback Jack Coan also linked up for an 18-yard score that made it 28-0 at halftime.

Coan bounced back after throwing his first interception of the season last week. The junior finished 12 for 15 with 134 yards and two touchdowns.

"It always feels good to have a good game, especially in a win," said Coan, who won his seventh straight start.

Tight end Jake Ferguson was on the receiving end of Coan's other touchdown. Their 2-yard score made it 41-0 with 8:01 left in the third quarter. Receiver Jack Dunn added the final score on a 3-yard run in the fourth.

With 4,916 career yards rushing, Taylor is now in third place on Wisconsin's all-time rushing list. Montee Ball (2009-12) is second with 5,140 yards. Taylor still has a way to go before catching the 7,125 yards posted by Ron Dayne (1996-99). Taylor continues to show why he deserves to be near the top of the list of Heisman Trophy contenders. The 2018 Doak Walker Award winner already has 16 touchdowns this season. That's the most by any FBS player in his team's first five games since Ricky Williams had 20 for Texas in 1998. Williams won the Heisman that season.

Minimal. The Badgers were a 36-point favorite against the Golden Flashes. Wisconsin did what it was supposed to do against an inferior Mid-American Conference opponent.