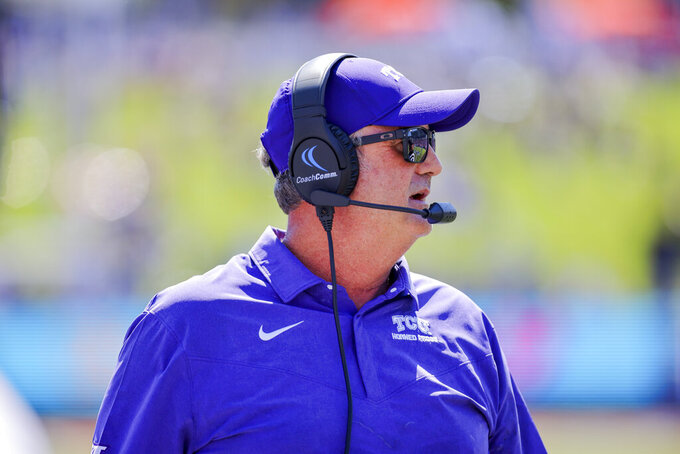 DALLAS (AP) — Max Duggan completed 22 of 29 passes for 278 yards and three touchdowns and Emari Demercado ran for two fourth-quarter touchdowns in TCU’s 42-34 win over SMU on Saturday as coach Sonny Dykes’ Frogs won the Iron Skillet rivalry game against the program that he coached the previous four seasons.

Dykes’ return to the SMU campus, coaching a longtime backyard rival, led to a crowd of 35,569 — the largest for a regular-season game in 23-year-old Ford Stadium and the school’s first sellout since 2015.

What was naturally seen by SMU fans as a disappointing departure, led to an exchange of words back and forth during the offseason. Mustangs receiver Rashee Rice, who went into Saturday’s game ranked first in FBS receiving yardage per game (163.7) and second in catches (9.3), posted soon after Dykes’ move that “No one comes to Texas to Fort Worth”.

“I’m glad this is over,” said Dykes, who faced a similar situation last year taking SMU to Louisiana Tech, where he coached from 2010-12. “I’m hopeful now we can go on and I coach my team and not have to deal with some this stuff you have to deal with."

Duggan threw 18 yards to Savion Williams in the first quarter, 8 yards to Jared Wiley in the second period and 80 yards on a shuffle-pass jet sweep to Derius Davis to give the Frogs a 28-7 lead.

Demercado scored from 1-yard out on a drive that began at TCU’s 37 following an interception by Josh Newton to put the Frogs ahead 35-21 midway through the fourth. With SMU within eight points in the closing minutes, Demercado burst through the middle and raced 63 yards for another score with 2:31 to play.

Tre Siggers rushed for three short touchdowns for SMU (2-2), including a 2-yarder with 5:14 left to get within 35-27 but a two-point pass failed. SMU quarterback Tanner Mordecai threw a 35-yard scoring pass to Jake Bailey with 1:04 left to cap the scoring.

Mordecai passed for 372 yards with two touchdowns and two interceptions, and Rashee Rice caught six passes for 74 yards. Bailey, a senior who transferred this year from Rice and never played for Dykes, had eight catches for 163 yards.

SMU coach Rhett Lashlee said Mordecai and Rice both played hurt throughout the second half.

Both coaches said they believed their players left potentially harmful emotions back in the locker room.

“There wasn’t a lot of talking going on,” Dykes said. “I thought it was a cleanly played, good, hotly contested football game. Just exactly what you’d want.”

TCU: Dykes is the first Frogs football coach to win his first three games since Francis Schmidt did it in 1929. The team’s previous 3-0 start was in 2017, when Dykes was a TCU offensive analyst under Gary Patterson and the Frogs reached the Big 12 championship game.

SMU: The Mustangs’ AAC opener will be next Saturday at UCF. “It’s without question the most difficult place to play in our league,” Lashlee said. “They might be the most talented team in our league.” Plus, Lashlee will coach against his mentor, Gus Malzahn.