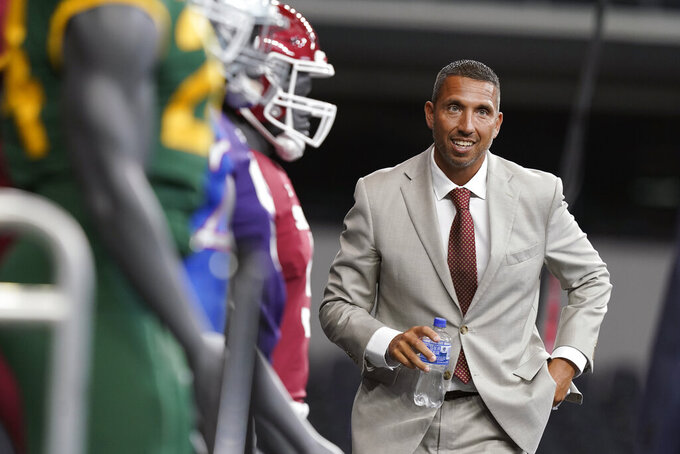 ARLINGTON, Texas (AP) — Two of the three new head coaches in the Big 12 aren't really new at all when it comes to the state of Texas, the conference and the traditional Dallas-area home of the league's football media days.

TCU's Sonny Dykes and Joey McGuire at Texas Tech have been there, done that.

Dykes is the son of late former Texas Tech coach Spike Dykes, was an assistant with the Red Raiders in the early 2000s and even spent a season on the staff of Gary Patterson five years before replacing the longtime Horned Frogs coach.

The 52-year-old has already been a head coach in his home state, having spent the past four seasons at SMU in Dallas, about 30 miles from the TCU campus. But that was the American Athletic Conference. This is the Big 12.

“Look, I love this league,” Dykes said Thursday, the last of two media days on the field at AT&T Stadium, home of the Dallas Cowboys and site of the Big 12 championship game.

“I’m familiar with a lot of these coaches,” Dykes said. “A lot of these guys, I’ve known them most of my life and most of their lives. I’ve been to games in these stadiums when I was a kid. That felt like home.”

McGuire, a championship-winning high school coach south of Dallas in Cedar Hill, joined the Red Raiders after five years as an assistant at Big 12 rival Baylor. He replaces Matt Wells, who was fired in the middle of his third season last year.

The difference is Dykes has left the state, with head-coaching stops at Louisiana Tech and California. After he was fired at Cal, Patterson hired him as an offensive analyst.

McGuire has barely left the Dallas area, where he was born, went to college (Texas-Arlington) and coached for 22 years before straying 100 miles south to Waco.

“I think the Texas high school coaches understand, what we say, we're going to do, that they can trust us to take care of their players,” McGuire said. “Whenever you can walk into a high coach and the head coach knows, 'Hey, this guy is what he's all about, what he says, what he's going to do,' it makes a huge impact on those guys.”

Spike Dykes got to see his son in charge of the sideline at Louisiana Tech and Cal, but died less than a year before Sonny Dykes was hired at SMU, which was one of Texas Tech's rivals in the Southwest Conference. TCU was another SWC foe, and son said dad always thought it was a good job.

“It's a little bittersweet,” Sonny Dykes said. “I think he would have gotten a kick out of me being at SMU. I know he's looking down and excited about this opportunity and certainly gets a kick out of it.”

Iowa State had its highest-ever preseason ranking at No. 7 last year before a 7-6 season that ended with a loss in the Cheez-It Bowl a year after the Cyclones lost to Oklahoma in the Big 12 championship game.

The Cyclones will try to bounce back from that disappointment, but will have to do it without quarterback Brock Purdy and running back Breece Hall, who had consecutive 1,700-yard seasons before bypassing his senior year and going early in the second round of the NFL draft.

“I think I said this a year ago, if we would have ever listened to what people said about Iowa State in the preseason hype, we would have never got our program off the ground,” said coach Matt Campbell, who is going into his seventh season after consistent chatter over several years about him taking a higher-profile job.

Hunter Dekkers will get the first shot at replacing Purdy, a three-year starter, while the task of filling Hall's void will be considerably tougher.

Texas running back Bijan Robinson was the most likely among the players at Big 12 media days to become a Heisman Trophy candidate. So the junior knew the question was coming after he rushed for 1,127 yards, averaged 5.8 yards per carry and scored 11 touchdowns.

Robinson's name surfaced a year ago when he had five consecutive 100-yard games, particularly after career highs of 35 carries for 216 yards in a 32-27 victory at TCU.

The last two of those five games were the start of a six-game losing streak, and Robinson missed the final two games after dislocating his elbow in a 57-56 loss to Kansas.

“When everybody on the team is successful and we start winning games, then it's not just about me,” Robinson said. “It's about everybody that's around me that's getting their awards, too. When we win games, everybody eats on the team. It is a distraction, but when we all eat, then we'll all succeed together.”

Once again, Big 12 coordinator of officials Greg Burks got a question about the “Horns Down” signal, this time on whether it was a dead issue. Burks didn't really say, except to try to lump the gesture in with all taunting situations by labeling it a judgment call.

“Let me be very clear with ‘Horns Down.’ I have no ownership on this symbol,” Burks said as he flashed both the “up” and “down” version. “This symbol is the same as all other signals. It’s when you do it, who you do it to and which manner you do it.”