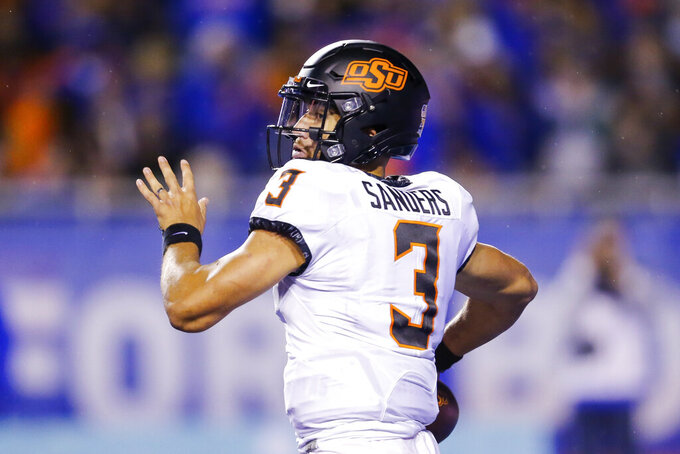 Oklahoma State quarterback Spencer Sanders looks for a recever during the first half of the team's NCAA college football game against Boise State on Saturday, Sept. 18, 2021, in Boise, Idaho. (AP Photo/Steve Conner)

BOISE, Idaho (AP) — Jaylen Warren rushed for 218 yards and two touchdowns, Oklahoma State pitched a second-half shutout and the Cowboys escaped with a 21-20 victory over Boise State on Saturday night.

Boise State had a chance to steal the win after a turnover late in the game, but Jason Taylor got a fingertip on Jonah Dalmas’ 36-yard field goal attempt, pushing the ball wide left with 2:05 remaining.

Oklahoma State (3-0) leaned on its rushing attack to grind out the win, throwing the ball just 13 times. However, none was bigger than Spencer Sanders’ 24-yard completion to Cale Cabbiness to ice the win in the waning minutes of the game.

“I told the team after the game that because of the way that we have to play football right now, we’re learning how to play as a team,” Oklahoma State coach Mike Gundy said. “I thought our coaches made really good adjustments at halftime, particularly defensively on a couple of things.”

Gundy’s assessment came across as modest, considering his defense held Boise State to 64 total yards in the second half.

“We have to be more consistent,” Boise State coach Andy Avalos said. “Obviously the way we finished the first half wasn’t exactly stellar. We didn’t finish the half the way we are capable of.”

After Boise State raced to a 10-0 lead, Warren put the hostile home crowd on notice when he broke two tackles and outran the rest of the Boise State defense for a 75-yard touchdown run with 4:59 left in the first quarter.

The Broncos appeared in control of the game late in the first half with a 20-7 lead, but Oklahoma State roared back before halftime with a pair of TDs to take a 21-20 lead, which its defense made stand up in a physical second half.

However, the ending wasn’t without high drama.

With Oklahoma State trying to salt the game away with just over three minutes remaining, Riley Wimpey jarred the ball loose from Warren. J.L. Skinner picked up the ball at the Cowboys 41 and returned it for a touchdown.

During the play, the officials blew it dead, calling Warren down. After a brief review, the initial call was overturned and Boise State was given possession but not the touchdown.

Boise State’s Hank Bachmeier threw for 242 yards and a touchdown, while Khalil Shakir had eight catches for 78 yards.

Warren looked more than comfortable in his return to Boise as he became the first player to run for more than 200 yards against the Broncos since Teriyon Gipson rushed for 205 for New Mexico in 2014.

The Utah State transfer played against Boise State last year as a member of the Aggies and had 89 yards and the team’s only two touchdowns in a 42-13 loss.

With his parents in attendance, Davis caught his first pass on the Broncos’ opening offensive drive. Then on the Broncos’ next possession, he caught a 28-yard touchdown pass. He finished the game with four catches for 56 yards.

Oklahoma State: As the Cowboys begin Big 12 next week, they desperately need to get a trio of injured receivers back and in sync with Sanders. Leading receiver Jayden Bray, Brayden Johnson, and Tay Martin were all out against Boise State — and it showed. Without much of a threat through the air, the Cowboys are sure to struggle despite a stout rushing attack.

Boise State: The Broncos were hoping a fully healthy George Holani at running back might be what their offense needed to balance its attack. But Holani, who didn’t play in the season opener and was limited against UTEP, mustered 28 yards on 12 carries. As a team, Boise State has 202 yards rushing through the first three games.