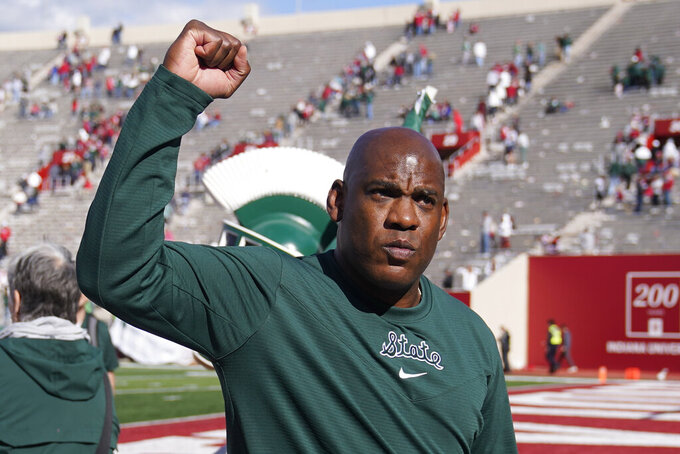 The spotlight shines on the Big Ten this week with three games sure to affect the division races and possibly the College Football Playoff.

The best of the bunch is in East Lansing, where No. 8 Michigan State hosts No. 6 Michigan in a matchup of unbeatens that will begin separating the top of the East Division.

No. 20 Penn State goes to No. 5 Ohio State as a big underdog in a meeting of teams heading opposite directions in recent weeks. No. 9 Iowa visits Wisconsin in what figures to be a defensive battle the Badgers probably need to win to stay alive in the West.

Some other games to watch: No. 10 Mississippi at No. 18 Auburn, No. 1 Georgia vs. Florida in Jacksonville, Texas at No. 16 Baylor and UCLA at Utah.

Ask a Michigan fan to name the biggest blemish on Jim Harbaugh's coaching record, and he or she would tell you it's the fact he's winless against Ohio State. You can bet the Big Blue faithful isn't fond of his 3-3 record against Michigan State, either.

The Wolverines and Spartans, both 7-0 overall and 4-0 in the Big Ten, meet in their first top-10 showdown since 1964. The winner will come out of it at least tied for first in the East Division. The loser will face a one-game gap that will not be easy to overcome given the way Ohio State is playing right now.

Michigan, with the 1-2 punch of Blake Corum and Hassan Haskins, and Michigan State, with national rushing leader Kenneth Walker III, both are averaging better than 5 yards per carry.

This game could come down to which quarterback makes the big play in the fourth quarter, Michigan's Cade McNamara or Michigan State's Payton Thorne.

The Rebels are slight underdogs at Auburn. Corral has been dealing with a sore ankle, and several of his offensive teammates are ailing.

What a perfect stage to make a statement. Corral has thrown for 15 touchdowns against one interception and ranks in the top 10 nationally in total offense, passing efficiency and points responsible for.

Nothing will come easily against Auburn. The Tigers' pass defense is middling statistically, but they have an aggressive pass rush and the Rebels have allowed eight sacks the last two games.

4 — Consecutive Pac-12 road wins by UCLA, which visits Utah. It's the longest streak of its kind for the Bruins since they won seven conference road games in a row from 2013-15.

6-15 — Pittsburgh's record at home against Miami. The Panthers are 9 1/2-point favorites against the Hurricanes at Heinz Field, according to FanDuel Sportsbook.

46 — Points scored against Georgia, the fewest through seven games since the 1971 team allowed the same number.

272-64 — Ohio State's scoring margin in its five straight wins since losing to Oregon on Sept. 11.

2004 — The last time Oklahoma was 8-0. The Sooners won their first 12 games that year under Bob Stoops before a lopsided loss to Southern California in the Orange Bowl national championship game.

Bronco Mendenhall returns to Provo, Utah, where he won 99 games over 11 years and never had a losing record before leaving for Virginia in 2016.

Mendenhall's Cavaliers are on a four-game winning streak and looking for a fifth straight victory for the first time since 2007.

The Mean Green can use their glut of injuries as an excuse this year, but the slide under Littrell is now into its third season.

North Texas has lost 12 of its last 21 games, its only win this year is against a bad FCS opponent, and it takes a six-game losing streak on its trip to Houston to face Rice.

Littrell is one of the more handsomely paid coaches in the Group of Five conferences, at $1.9 million annually, and he's signed through 2023. A fresh face could be in order before the Mean Green make their move from Conference USA to the American Athletic Conference.