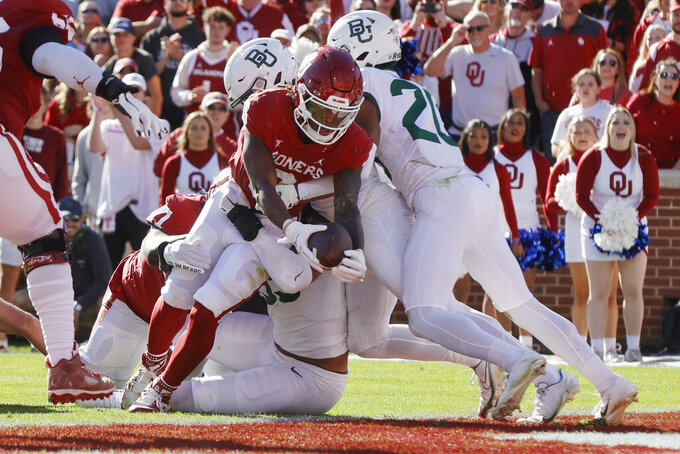 Oklahoma running back Eric Gray scores a touchdown against Baylor in the first half of an NCAA college football game, Saturday, Nov. 5, 2022, in Norman, Okla. (AP Photo/Nate Billings)

Oklahoma isn't accustomed to being in this position, already having been eliminated from the Big 12 title chase. This marks the first time since 1998-99 that Oklahoma will not have back-to-back seasons of at least 10 wins. The Sooners still need one more win to become bowl eligible. Last-place West Virginia must capture its final three games to qualify for a bowl.

Oklahoma QB Dillon Gabriel against West Virginia's defense. Gabriel threw three interceptions in a 38-35 loss to Baylor last week. Still, his 16 touchdown passes are tied for second in the league. The Mountaineers have been decimated by injuries in their secondary, giving up an average of 40 points over the last five games and having made a league-low three interceptions all season.

Oklahoma: RB Eric Gray is looking to surpass 1,000 rushing yards for the season. He has three straight 100-yard rushing efforts, six in all, and 902 total yards.

The teams’ 2020 meeting in Morgantown was canceled due to the coronavirus pandemic. ... Oklahoma is 1-3 on the road this season. ... The Mountaineers have lost three straight. ... Oklahoma has beaten West Virginia every year since the Mountaineers joined the Big 12 in 2012. ... Oklahoma won't reach the league title game for the second straight year, even if it wins its last three games. Texas, Baylor and Kansas State are tied for second place with 4-2 marks. All have beaten the Sooners. Texas and Baylor still must play one another. ... West Virginia was held to a season-low 200 total yards last week. ... West Virginia and Oklahoma have allowed a combined 849 yards of offense per game.