Yates adds drama to Jackets' QB plan against No. 6 Clemson 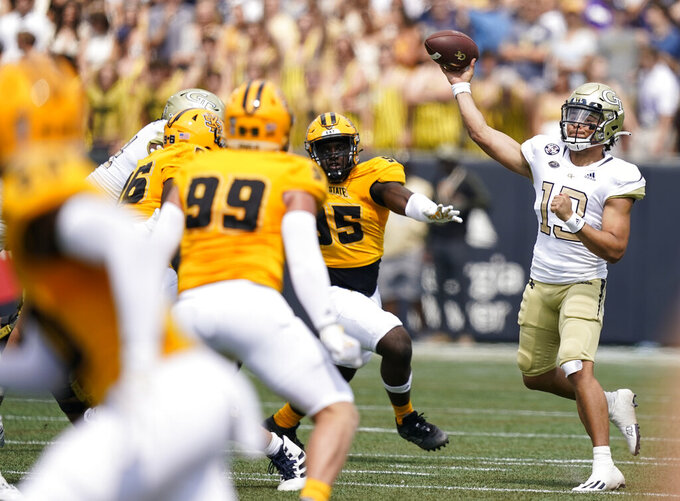 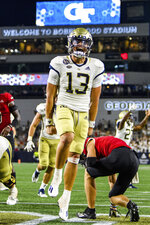 The test of Yates' composure ramps up if he starts again at No. 6 Clemson on Saturday.

Jeff Sims' left arm was in a sling after leaving Georgia Tech's shocking 22-21 loss to Northern Illinois on Sept. 4 with an undisclosed injury. Sims was in uniform but did not play as Yates flourished in the Yellow Jackets' 45-17 win over Kennesaw State last week.

Yates became the first Georgia Tech quarterback to throw four touchdown passes in his first start. The redshirt freshman appeared poised as he completed 17 of 22 passes for 254 yards.

Including his backup role against Northern Illinois, Yates has thrown five touchdown passes without an interception.

Yates has been a bright spot in a shaky start for Georgia Tech (1-1), also demonstrating the running skills that helped make Sims effective last season.

Sims is considered to be one of the top players in coach Geoff Collins' rebuilding effort. Even so, Yates' performance has prompted questions about who will play when Sims is fully recovered.

“I know what we’re going to do,” Patenaude said. “Coach Collins knows. The quarterbacks know. We’re very fortunate we have two quarterbacks who can play.”

Clemson defensive coordinator Brent Venables said the Tigers’ preparation does not change for either quarterback.

“The quarterbacks, regardless if they play two or not, are very similar,” Venables said. “They’re dual-threat guys that can improvise and extend plays and put you in conflict.”

Sims was available only in an emergency situation last week. Though his left arm was wrapped, he's a right-hander and may be able to throw effectively. It would be a dramatic change if Sims has full medical clearance and Yates is the starter.

Then again, Yates has impressed both Collins and Patenaude.

“Jordan played great,” Patenaude said. “... He played with good confidence, good composure. So super-excited about both those guys.”

Collins said he wasn't surprised Yates was prepared for the start.

“We want everybody to prepare like it’s going to be their show on Saturday and I think Jordan has done that the last two years so that then when he gets his shot it’s not a new process,” Collins said. “It’s something he’s been working on his entire career. ... I was really proud of him on Saturday.”

No matter the starting quarterback, the Yellow Jackets' challenge is daunting. Clemson (1-1) has not allowed a touchdown on defense this season and has won six consecutive games in the series. Since Collins' arrival, the Tigers beat the Yellow Jackets 52-14 in 2019 and 73-7 last season.

Clemson is favored by 28 1/2 points, according to Fanduel Sportsbook.