At 3-3, Texas A&M and Fisher stuck in neutral 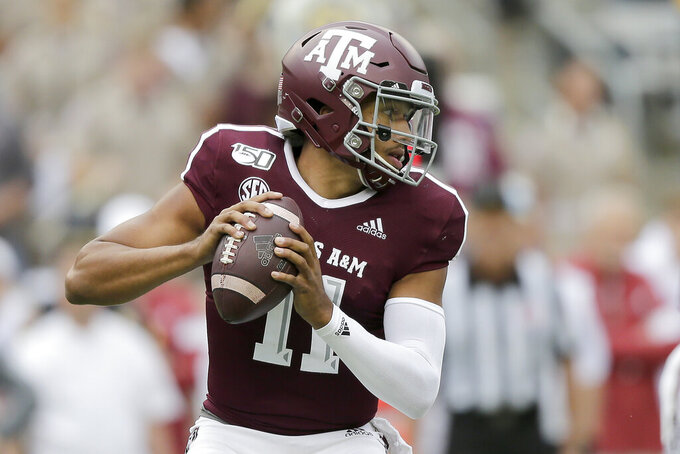 The Aggies are 3-3 and out of the Top 25 for the first time this season after losing 47-28 at home to No. 1 Alabama. And while two of those losses have come against top-ranked teams, the Aggies appear no closer to emerging as a contender in the SEC West in Year 2 under Fisher than they were before.

The schedule has been brutal and Saturday's crowd of 106,000-plus has so far been willing to follow Fisher's calls to "trust the process," but they eventually will expect to win some of those games, not just put up a good fight in a loss.

Life in the SEC is tough, but that's what Texas A&M wanted when it made what former school President Bowen Loftin called the "100-year decision" to move from the Big 12. There are three teams from the state of Texas ranked in the AP Top 25 and Texas A&M isn't one of them.

To be fair, with just six seniors, the Aggies have one of the youngest teams in the SEC and lost their two top running backs this season to injury. And they face a midseason stretch of four winnable games starting next week at Mississippi. But then they end the season with consecutive road trips at Georgia and LSU.

Win one of those two at the end and the Aggies can claim progress. Lose them and Texas A&M is still spinning in circles.

Fisher was left to lament missed opportunities against Alabama. Texas A&M led 7-0 after driving down the field to a touchdown on its first possession but quickly capitulated to trail 24-13 by halftime.

"We just got to learn to get over that hump, and we got to push through it. And against good people, you can't almost get there," Fisher said. "You've got to be all the way, executing on 100% of every play."

The Aggies arguably put up a better fight against a national title-winning Alabama team in Kyle Field two years ago when former coach Kevin Sumlin was getting pushed out and quarterback Kellen Mond was a freshman.

Mond had a decent game Saturday with 264 yards passing and 90 rushing yards, with most of the latter piling up late when Alabama already had the game in hand. He ran for A&M's first touchdown and passed for two scores.

"I feel like we're headed in the right direction," Mond said. "You kind of look back at the games we lost and the games we've won, we definitely think we can play with every team."

Special teams problems highlighted another gap between the Aggies and the top of the SEC: the Tide's Jaylen Waddle ripped A&M for an average of 32 yards on four punt returns to go with his 31-yard touchdown catch in the first quarter.

Waddle, who is from Houston, was a player Fisher almost signed a couple of years ago, but he lost a hard-fought recruiting contest to his former mentor, Alabama's Nick Saban. Fisher is 0-3 against Saban and beating him may not happen until Fisher can keep Texas' best homegrown talent in the state.

Alabama also blocked a punt for a touchdown in the fourth quarter to put a final stamp on another dominant victory.

"We win and lose as a team," Fisher said. "There's nothing that costs us a game, except our whole football team and our coaching staff. We're all in this together."