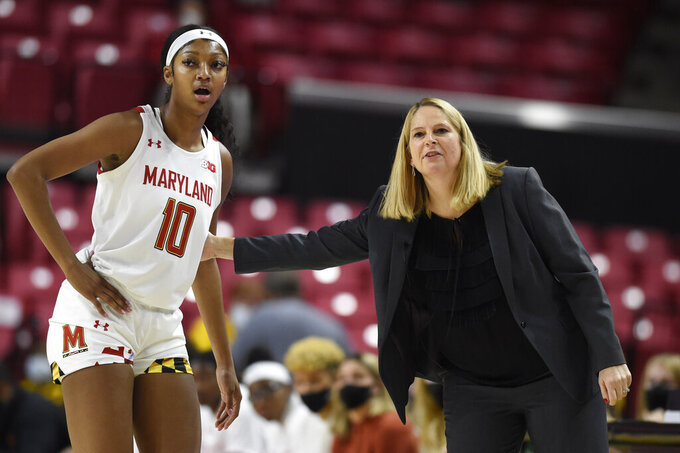 The Atlantic Coast Conference, Big Ten and Pac-12 launched an initiative Monday to raise awareness of the importance of mental health as part of their conference alliance announced earlier this year.

Teammates for Mental Health will be unveiled this week during basketball games involving the three conferences, including the ACC/Big Ten women's and men's challenges.

The centerpiece will be a public service announcement that will air throughout the 28 games being played from Nov. 29-Dec. 2. The PSA includes men's coach Mike Krzyzewski (Duke) and Wayne Tinkle (Oregon State), Maryland women's coach Brenda Frese and others, and it will air on ESPN, the ACC Network, the Big Ten network and the Pac-12 Network.

The initiative will also include in-arena signage and lapel pins for coaches to wear during games.

The ACC, Big Ten and Pac-12 announced in the summer the conferences were forming an alliance to work together on scheduling, plus off-field issues like the future of NCAA governance and athlete welfare.

“When the Alliance was formed back in August, people paid a lot of attention to the schedule pieces. And Kevin and I and George have been emphatic that that is a component of it, but you also have major issues from an NCAA standpoint and the future college athletics,” ACC Commissioner Jim Phillips said. "But at the core of it for us is really the student athlete experience."

Pac-12 Commissioner George Kliavkoff said 10 working groups of athletic directors and other administrators and school officials have been meeting regularly over the last four months. Four of the groups are focused on scheduling games and events between the conferences in football, men's and women's basketball and Olympic sports. The other six are looking at things like compliance, NCAA issues, social responsibility and how best to support mental and physical well-being of athletes.

The Teammates for Mental Health campaign is the first public collaboration to come from the three conferences. Kilavkoff said each conference was already working independently on athlete mental health issues.

“But the alliance is all about kind of sharing best practices across the 41 institutions, and across the three conferences, and specifically as it relates to student-athlete health and well-being, we have the experts for each of the conferences, each of the institutions, meeting on a regular basis, recommending and suggesting things that we can do through the alliance to elevate what they do for their student-athletes,” Kliavkoff said.

The mental health of athletes has taken on growing prominence, with Olympic champion Simone Biles and tennis star Naomi Osaka among those speaking out or taking steps to protect themselves.

The initiative is aimed at encouraging athletes and coaches to be on the lookout for signs that someone close to them is struggling with their mental health.

Big Ten Commissioner Kevin Warren, who played college basketball, said the pressure on athletes is greater than ever and the attention they receive through social media can compound the stress. He said the goal is to have everyone involved in athletics treat signs of mental-health ailments as they would physical injuries.

Warren's son is a football player at Michigan State. The commissioner said mental health is a consistent topic of conversation with his son, Powers, and his friends and teammates.

“The one thing that came up over and over and over again was the importance of making sure that an environment is created, where athletes should feel comfortable, even more comfortable than to seek help for an issue involving their mental health and wellness as they do if they had an injury with a knee or a shoulder or an ankle or whatever the case may be,” Warren said.