AP Top 25 Takeaways: Just being 'Bama might not be enough 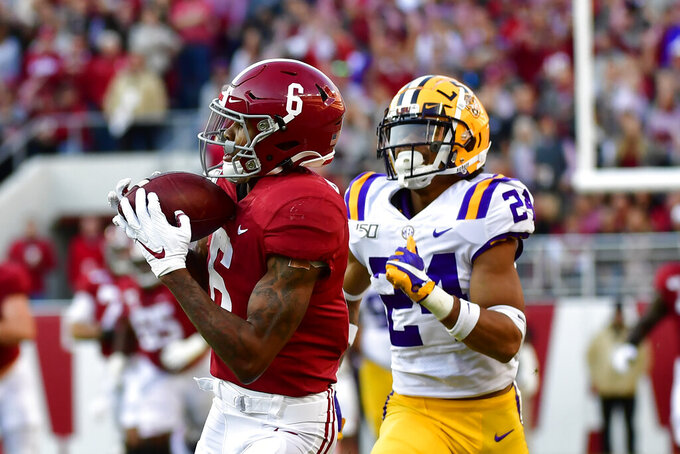 Alabama wide receiver DeVonta Smith (6) makes a catch for a touchdown as LSU cornerback Derek Stingley Jr. (24) defends in the first half of an NCAA college football game, Saturday, Nov. 9, 2019, in Tuscaloosa , Ala. (AP Photo/Vasha Hunt)

TUSCALOOSA, Ala. (AP) — Alabama's DeVonta Smith was a blur, streaking past an LSU defender down the sideline for an 85-yard touchdown that gave the Tigers and their fans one last thing to be nervous about.

The Crimson Tide's final offensive play made it 46-41 with 1:21 left in the fourth quarter of a 1 vs. 2 matchup Saturday that lived up to the hype. The instant classic got no closer. LSU snapped an eight-game losing streak to Alabama that put the Tigers on the path to an SEC West championship and their first appearance in the College Football Playoff.

There has never been a playoff without Alabama. The Crimson Tide is 5 for 5. To keep that streak going, the Tide is going to need some help — from other teams and the selection committee. That late touchdown from Tua Tagovailoa to Smith just might aid their cause, shrinking the final margin.

Barring a shocking collapse by LSU down the stretch against Mississippi, Arkansas and Texas A&M, the Tigers are going to win the SEC West and play in the conference championship game against Georgia. The best Alabama can do is 11-1, with a victory against a good, but certainly not great Auburn team.

In 2016, 11-1 with a victory against LSU was good enough to get Alabama into the playoff when the next best choice was an Ohio State team that had won the Big Ten, but lost twice that season by double-digits.

Will the Tide be so fortunate this time around? There is potential for volatility around the country. In the Big 12, No. 9 Oklahoma barely escaped a second loss Saturday night in Norman against Iowa State. In the Pac-12, No. 7 Oregon and No. 8 Utah are on course for a meeting of 11-1 teams in the conference championship game, but would it be all that shocking if one or both stumbled along the way? Both those leagues could produce two-loss champions with light resumes.

That could open the door for Alabama as the team that ALMOST beat the team.

Or those leagues could end up with 12-1 or maybe even 13-0 champions (hello, Baylor!) to provide the committee an alternative to rewarding a Tide team that lost the biggest game on its schedule. At home.

"We knew we're the better team," LSU linebacker Patrick Queen said. "We watched those guys on film. They're not the same as they used to be."

Or maybe the committee looks past Alabama's flimsy credentials when it comes to impressive victories and instead focuses on its dominance. The five-star-studded roster. Tagovailoa and maybe the best group of receivers in college football history. There is little doubt that in any given year, Alabama has a case to be one of the four best teams in the country. The selection committee's charge is to pick the four best teams.

How exactly that is defined is difficult to pin down. A little eye test. A little strength of schedule. Big wins. Quality of losses. Conference championships are important, unless they are not.

Reporters asked Alabama linebacker Anfernee Jennings if he was optimistic about the Tide's playoff chances.

It's good to take a positive approach, but just being 'Bama might not be enough this time.

Is P.J. Fleck for real? That question has been asked a lot since the coach who coined the catchy and slightly corny slogan "Row the Boat" became a hot item in college football while taking Western Michigan to the Cotton Bowl in 2015. Fleck is a high-energy crafter of culture. He thinks of himself as an educator and football as his platform to make the world a better place by making his players better men.

Feel free to be skeptical of Fleck's higher calling, but he is no phony. He believes in the mission and his methods. What gets lost in Fleck's persona is this: He has turned out to be a darn good football coach and program builder in three seasons at Minnesota.

The 13th-Gophers improved to 9-0 for the first time since 1904 by beating No. 5 Penn State. It was the Gophers' first victory at home against a top-five team since 1977.

The Gophers are still a relatively young team. That showed early this season when they needed a few great escapes to beat South Dakota State, Fresno State and Georgia Southern. Then a stretch of bad teams such as Rutgers and Maryland helped build confidence further.

Minnesota didn't get much respect from the playoff selection committee last week, coming in 17th in its first rankings. That should change significantly Tuesday. Minnesota still has important Big Ten West games against No. 18 Iowa and No. 16 Wisconsin to play. Splitting them should be enough to reach the Big Ten championship for the first time. And just getting to Indianapolis could be enough to send the Gophers to the Rose Bowl for the first time since the 1961 season.

Fleck recently signed a seven-year extension with a $10 million buyout that will likely keep him off the market and away from Florida State and Southern California. Perhaps.

This is certain: Fleck and the Minnesota are for real.

AROUND THE COUNTRY: Next week, No. 11 Baylor will get the spotlight that Minnesota basked in this week. The Bears beat TCU in three overtimes to move to 9-0 and set up biggest late-season home game in Waco, Texas, in the post-Art Briles era. Oklahoma comes to town for a game that could all but wrap up the top spot in the Big 12 championship game for the Bears. ... Chase Young was not missed at all by No. 3 Ohio State against Maryland. The Buckeyes play Rutgers next weekend so Young won't be missed then, either. After that it's No. 5 Penn State at the Horseshoe and then a trip to the Big House for No. 14 Michigan. It's hard to say how long Young, who tweeted he received a loan from a family friend last year and paid it back, will need to be held out. If what he and his lawyer say is true, it would seem this could be worked with the NCAA before that game against Penn State. ... This is what the point of no return looks like at Arkansas for coach Chad Morris: Western Kentucky (and Arkansas transfer Ty Storey, the quarterback Morris brought in two transfers to replace) 45, Razorbacks 19. It would be shocking if Morris gets a third year. It would be a little surprising if he even got another week. ... Florida State will likely get back to a bowl after beating Boston College for its fifth victory a few days after firing Willie Taggart. The Seminoles get Alabama State next week. ... On Bud Foster Day at Virginia Tech, the retiring defensive coordinator's guys slowed one of the best offenses in the country and the Hokies beat Wake Forest to remain very much in control of their ACC Coastal championship hopes. ... Texas got a big victory against Kansas State to keep a season of high expectations from potentially spiraling.