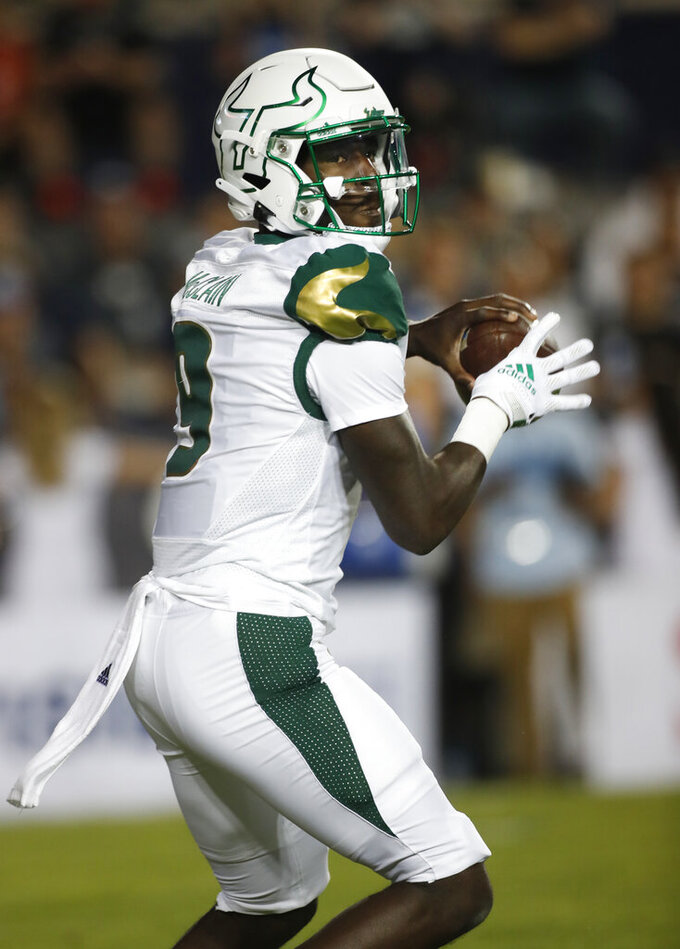 South Florida quarterback Timmy McClain (9) looks to pass the ball in the first half of an NCAA college football game against BYU Saturday, Sept. 25, 2021, in Provo, Utah. (AP Photo/George Frey)

Baylor Romney is turning into the football equivalent of an ace relief pitcher for BYU. When the Cougars need him to step in and run the offense on short notice, he delivers winning results.

Romney threw for a career-high 305 yards and three touchdowns to lead No. 15 BYU to a 35-27 victory over South Florida on Saturday night.

Tyler Allgeier ran for 81 yards and a pair of touchdowns to help the Cougars earn their sixth straight victory dating to last season. Gunner Romney and Puka Nacua each finished with more than 100 receiving yards, combining for 221 yards and a touchdown on nine catches.

BYU (4-0) turned in its most dominant offensive performance of the season, totaling 443 yards while averaging 8.9 yards per play.

“We’re right on the bridge of going off in the pass game, so I’m excited,” said Nacua, who finished with a career-high 102 receiving yards on four catches.

Timmy McClain threw for 186 yards and ran for 55 yards to lead South Florida. Jaren Mangham added 86 yards and two touchdowns on the ground. The Bulls (1-3) scored on three straight clock-chewing drives in the second half before ultimately coming up short.

“We were able to get the yards we needed to keep the drives going,” USF coach Jeff Scott said. “That’s what we’re going to have to be able to do this year, especially with the lack of depth on defense. We’re not going to be able to play as fast as we would like to play on offense.”

Baylor Romney started at quarterback in place of Jaren Hall, who suffered a rib injury on BYU’s final scoring drive against Arizona State a week earlier. With him at the controls, the Cougars ran over the Bulls from the start.

“We thought Jaren would be ready to go, but the advice of our medical staff was to hold him out,” BYU coach Kalani Sitake said. “We felt good about Baylor starting this game.”

On his first pass of the game, Baylor Romney hit his brother, Gunner, with a 49-yard strike that set up BYU’s first touchdown. He followed with a 55-yard dart to Puka Nacua that set up another score on the Cougars’ second drive.

BYU raced out to a 21-0 lead in the first quarter after scoring on each of its first three drives. Allgeier accounted for back-to-back touchdowns in that stretch, scoring twice on 1-yard fourth-down runs.

“I think if you score that many points early that you’re going to be in a good spot,” Sitake said. “I liked all three phases to start out. But the second half just puts sort of a dark cloud over all of it.”

“I can’t wait to go back and watch this tape,” Scott said. “Timmy made some plays with his feet. I think there were some critical third down and fourth down plays against a really good defense.”

The Bulls finally scored their first touchdown on Xavier Weaver’s 3-yard run on fourth down off a reverse midway through the third quarter. USF marched down on the field on each of its next two drives and scored back-to-back touchdowns on short runs by Mangham to cut the deficit to 35-27 with 5:41 remaining. Mangham’s second TD, a 1-yard run on fourth down, capped off a 19-play, 94-yard drive that burned nine minutes off the clock.

USF did not recover an onside kick, allowing BYU to run out the clock on its final drive.

“We were just focused on playing assignment-sound football, and in the second half we really struggled to do that,” BYU linebacker Pepe Tanuvasa said. “On the bright side, we haven’t really played a full game of our best defense, so I’m really excited for next week to show that.”

South Florida: Once the Bulls figured out BYU’s defense in the second quarter, they were able to string together enough long drives to keep the Cougars from completely embarrassing them. Still, an inability to defend BYU, especially in the first quarter, proved too much to overcome.

BYU: The Cougars rolled to a victory behind a strong start from their offense. BYU scored touchdowns on four of five first-half drives, and it provided enough of a cushion to withstand South Florida’s attempted second-half rally.

Baylor Romney improved to 3-0 in his career as a starter. Romney led BYU to victories over Boise State and Liberty in 2019 while filling in for an injured Zach Wilson. In his three career starts, he has thrown for a total of 788 yards and eight touchdowns while completing 69% of his passes.

Does this mean that Romney could push Hall to take over the starting quarterback job? The redshirt sophomore does not anticipate a quarterback controversy brewing. Nor does he welcome one. He’s content to fill the role he’s asked to fill.

“That’s a coach’s decision,” Romney said. “I don’t think anyone should lose their job due to injury. It’s in the coach’s hands.”

BYU should move up a couple of spots in the AP Top 25 after closing out September with a perfect record.