Beavers host Cougars with both teams sitting at 4-2 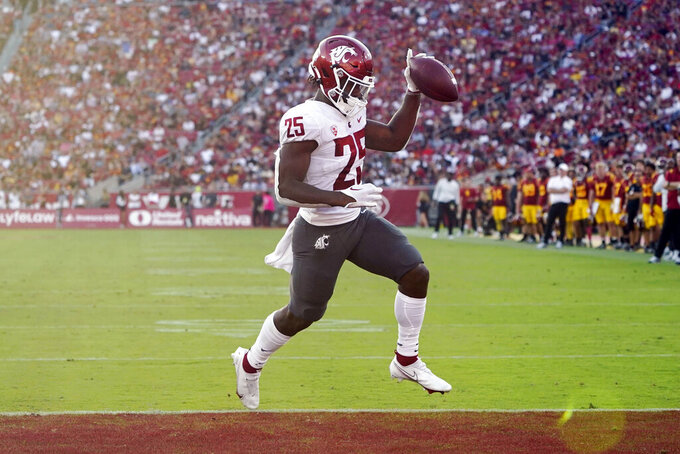 Washington State running back Nakia Watson (25) celebrates after scoring a touchdown on a pass from quarterback Cameron Ward during the first half of an NCAA college football game against Southern California, Saturday, Oct. 8, 2022, in Los Angeles. (AP Photo/Marcio Jose Sanchez)

Line: Oregon State by 3 1/2, according to FanDuel Sportsbook.

Washington State meets Oregon State on Saturday night in Corvallis. Both teams share identical 4-2 records at the halfway point of the season. The Cougars are coming off a 30-14 loss to No. 6 USC last Saturday. Running back Jaylen Jenkins was named the Pac-12's Freshman of the Week after he had 130 yards rushing against the Trojans. Oregon State beat Stanford 28-27 last Saturday in Palo Alto on Tre'Shaun Harrison's 56-yard touchdown reception in the final moments. It was the Beavers' first win at Stanford since 2006. Neither team is likely to vie for the Pac-12 championship.

Washington State's defense ranks third in the Pac-12, allowing just 20.2 points a game. The Cougs gave up 188 passing yards to USC. Oregon State's offense will be led either by Ben Gulbranson, who started against Stanford, or Chance Nolan, who injured his neck in Oregon State's loss to Utah at the start of the month. The Beavs rank 10th in the Pac-12 for passing yards with an average of 249.7 yards per game, and ninth in passing touchdowns with nine.

Washington State: Linebacker Daiyan Henley ranks second in the Pac-12 with 55 tackles this season, including 10 tackles for loss. Against USC he had 11 tackles, seven solo. He's got eight career games with 10 or more tackles, five of them coming this season.

Oregon State: Two-way player Jack Colletto is a linebacker, fullback, running back and sometimes wildcat quarterback. He's the team's co-leader for rushing touchdowns with four. Last year he became the first Pac-12 player since Oregon's Charles Nelson in 2015 to have a rushing touchdown, a receiving TD and an interception in a single season.

The Cougars have won eight straight against the Beavers ... Washington State appealed the targeting penalty against right guard Grant Stephens during the USC game, but it was denied, meaning Stephens will miss the first half of the game in Corvallis. ... The Cougs also had two key injuries during the USC game: receiver Renard Bell and running back Nakia Watson have been sidelined indefinitely. ... The Beavers are hosting four of their last six games. ... Washington State downed the Beavers 31-24 last season. .... It's Washington State's second straight road game. ... A win will give Washington State its best start since 2018. ... Nolan was not cleared for practice earlier in the week, which likely means that Gulbranson will start at quarterback for the Beavs.