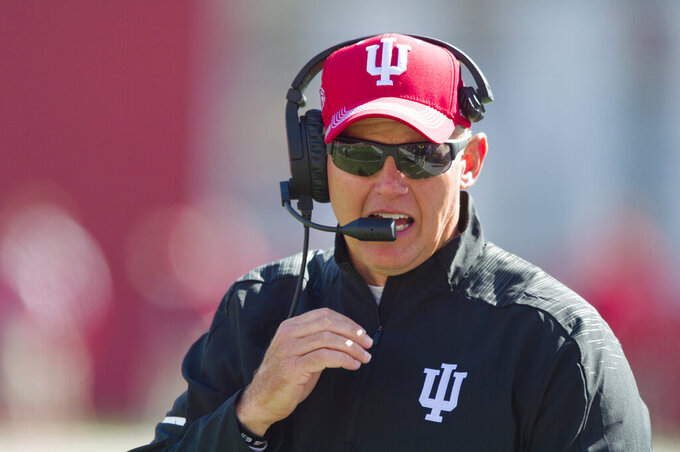 The Big Ten will start playing football at what normally would be midseason.

Don't expect the teams to be in midseason form.

The pandemic limited or eliminated most spring practices across the country. Positive COVID-19 tests and precautions, along with uncertainty about whether there would even be a season, caused disruptions in summer workouts and preseason practices.

As a result, conferences that started their seasons before the Big Ten saw a lot of early games filled with gaffes on special teams and poor tackling, among other problems.

“You’ve heard the stories about a couple of teams not doing any live tackling going into the game. I don’t think I needed to hear that to know that that’s probably not a good idea,” Nebraska coach Scott Frost said. “Obviously, you don’t want to get a punt blocked. That’s cost some people some games.”

According to Associated Press and NCAA research comparing seven-week averages this season with the 2019 full-season averages, penalties are up 7.6% nationally and blocked kicks or punts are up 38%.

The per-team scoring average of 30.3 points is more than a point higher than it was last season and slightly ahead of the record of 30 points per game in 2016. The total offense average of 412 yards is on pace to be the second-highest since the NCAA started keeping records in 1937, behind 417 yards per game in 2016.

“There does appear to be a lot of high-scoring games, that’s pretty obvious. Entertaining games,” Indiana coach Tom Allen said. “As a defensive coach, it’s rough to watch sometimes. When we were in the pandemic period, you couldn’t do a lot of defensive things. We couldn’t do seven-on-seven, so that favors the offense. You couldn’t tackle during the pandemic. So I think there’s a lot of variables.”

Even programs around the country with traditionally strong defenses have struggled at times. Clemson and Alabama, the Nos. 1 and 2 teams in the Top 25 and the dominant programs of the 2010s, are both averaging double-digit missed tackles for the first time since Pro Football Focus began tracking that statistic in 2014.

Alabama is allowing 10 more points per game than it did a year ago, and as a whole the SEC scoring defense average of 29 points is up nearly a touchdown from 2019.

Wisconsin safety Collin Wilder, whose team opens Friday night against Illinois, said when he has watched games, he's noticed drop-offs in tackling and communication among defenders.

“Obviously, because of all the COVID protocols and the delay of the season, I’m sure (for) everybody across the board tackling is one of the toughest things to work on during that time off,” Wilder said. "The biggest thing that I want us as a defense to do is just to make sure that right from the gate, that we can tackle really well, that we can tackle consistently. I think that’s going to be one of our biggest challenges because that’s just what the pattern is showing in college football right now.”

No. 5 Ohio State, which opens at home against Nebraska on Saturday, is considered the Big Ten's best hope of making the College Football Playoff. Coach Ryan Day won't predict how sharp his Buckeyes will be.

“I feel like it’s been so long since we played a game," he said. “Sometimes you don’t know, just trying to figure out what kind of team you have.”

Like the Southeastern Conference, the Big Ten is playing conference games only. The luxury of working out kinks and getting timing down in nonconference games, usually against overmatched opponents, doesn't exist this year.

“Obviously, it’s a different year, going right into Big Ten play," said Minnesota quarterback Tanner Morgan, whose 21st-ranked team hosts No. 18 Michigan on Saturday night. “There’s an excitement that we’re going right into playing an extremely talented well-coached football team in Michigan. Again, there was uncertainty if we were even going to be able to play. We were all at home for months. We weren’t even able to be around each other. So to start the year off, to be able to play football, is something that we’re very grateful for.”