CFP board chair: New format ideally in place by June 2023 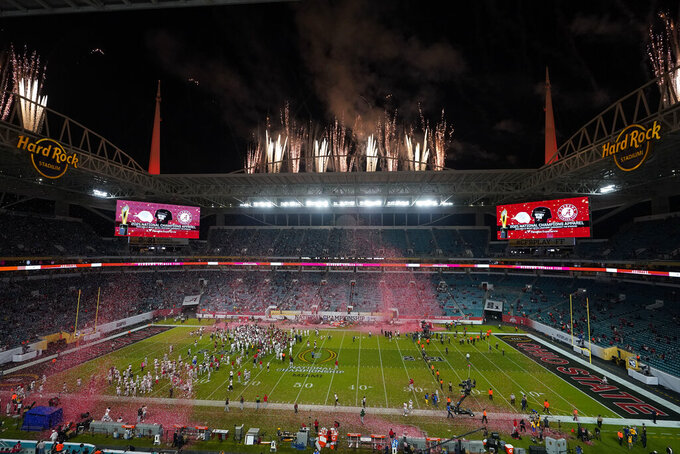 FILE - Alabama celebrates after their win against Ohio State in an NCAA College Football Playoff national championship game, Monday, Jan. 11, 2021, in Miami Gardens, Fla. College football and men's basketball players on scholarship in one of the major conferences can expect to soon earn a minimum of $50,000 each year he plays because of the influx of cash from so-called booster collectives brokering name, image and likeness deals.That prediction, based on market trends, was made this week by Blake Lawrence, co-founder and CEO of a company that helps athletes and schools navigate the ever-changing NIL landscape. (AP Photo/Wilfredo Lee)

DESTIN, Fla. (AP) — By this time next year, the university leaders who oversee the College Football Playoff want the next format for determining a champion settled.

Mississippi State President Mark Keenum, the chairman of the CFP Board of Managers, said Thursday the conference commissioners in charge of building the postseason system for the 2026 season and beyond will restart the task in the coming weeks.

“I’ve sent a note out to all my colleagues, the presidents and chancellors, to try to get us together sometime towards the end of the summer, hopefully by sometime before the end of August, just to continue the dialogue,” he said.

An attempt to expand the playoff from the current four-team format to 12 teams before the current 12-year contract with ESPN expires after the 2025 season fell apart last fall and was officially pronounced dead in February.

The CFP management committee, comprised of 10 FBS conference commissioners and Notre Dame's athletic director, spent the final six months of 2021 trying to come to unanimous agreement on a 12-team plan — but never got there.

While the playoff will remain a four-team event for the next four seasons, the commissioners don't have nearly that much time to figure out what is next. There is no playoff plan beyond 2025.

“So we’ve got to make some decisions,” Keenum said. “I’m hopeful ... within the year. We had our last meeting last month in May, and I said my hope to my colleagues, no later than this time a year from now we’ll know what the future holds for college football as far as the championship. We’ll try to stick to that.”

The Atlantic Coast Conference, Big Ten and Pac-12 all had objections with the 12-team plan that had been developed on a subcommittee of commissioners for more than two years.

“Whether or not that comes back and how this next cycle of conversation is approached, debated and decided remains to be seen,” SEC Commissioner Greg Sankey said this week at the conference meetings. “We’re back to square one, it seems.”

Keenum said while the commissioners will again do the bulk of the work on the CFP format, the presidents could take a more active role in helping things along.

“I think we can hopefully smooth out some of the wrinkles that are there right now. And maybe go back to our respective commissioners and say, ‘Here’s what we talked about,’" Keenum said. "And maybe give a little bit further direction for them and helping them ultimately come back to us with a resolution.”