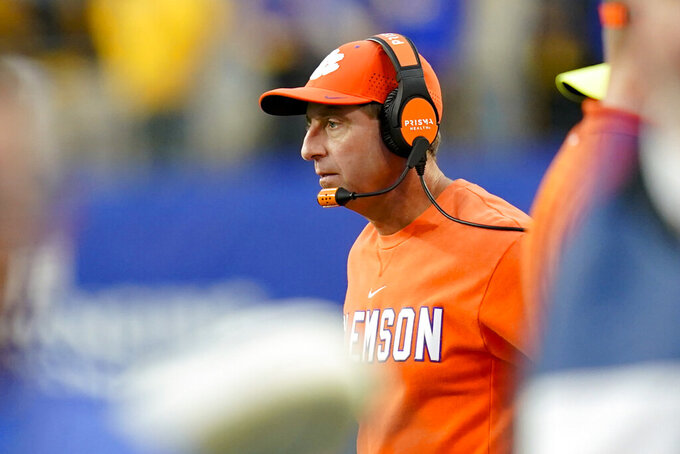 CLEMSON, S.C. (AP) — Clemson coach Dabo Swinney didn't anticipate a midseason quarterback competition to determine who'll start at one of the team's most stable positions the past decade.

“We'll run someone out there first on Saturday,” Swinney said. “Everything this week will count.”

The competition comes after the continued sputtering of an offense that's averaged 15 points a game against its six Power Five opponents this season. It's 20 points a game, including a 49-3 blowout of South Carolina State, is on track to be the team's lowest since 1998 (19.8) and nowhere near the output of the past 10 seasons when it scored more than 30 points a game each year.

“It's a what have you done for me lately world and we haven't done enough,” offensive coordinator Tony Elliott said.

Especially at quarterback where Uiagalelei is ranked 99th nationally in completion percentage and 128th in touchdown passes.

That's a significant drop off from Clemson's steady, talented legacy of quarterbacks, starting with Tajh Boyd in 2011 and continuing through national champions in Deshaun Watson and Trevor Lawrence through last season.

All three are past ACC players of the year and Uiagalelei was supposed to seamlessly follow in their successful footsteps.

Instead, Uiagalelei has struggled to connect with his receivers, throwing a pair of interceptions for the first time in his career in a 27-17 loss at No. 17 Pittsburgh that all but knocks the Tigers out of the chase for a seventh straight ACC title.

Phommachanh is a third-year sophomore who came in for two series against Pitt, leading a field-goal drive, after Uiagalelei's shovel pass was picked off by Pitt's SirVocea Dennis and returned 50 yards for a touchdown.

Uiagalelei returned in the fourth quarter, leading Clemson to its final points with a 72-yard scoring drive, the 6-foot-4, 250-pound sophomore finishing the sequence with a 6-yard TD run.

Swinney said Clemson's struggles make it necessary to evaluate all positions, including quarterback,

“We’re all disappointed but we have to pick ourselves up and get back at it,” Swinney said. "That’s what winners do.”

Up next are the Seminoles, who have won three straight games after a winless September that had their fans debating coach Mike Norvell's future in just his second season. Norvell said Florida State will prepare for multiple Clemson passers this week.

“Both those quarterbacks are talented, they’ve showed flashes of that through their careers," Norvell said. "For us, we’ve got to control the things that we can control.”

Uiagalelei believes he's played well enough to continue starting. He is ready to go show that at practice this week.

“You've got to go out there and earn it,” the quarterback said. "No matter who you are, no spot is guaranteed. If it’s not me next week, I’ll be right here and happy to see my brother Taisun play.”

Clemson's problems are not all on Uiagalelei.

Five-star freshman tailback Will Shipley bobbled away an open pass behind the defense that would've gone for an early touchdown with the Tigers leading 7-0, a play Elliott said he makes nine out of 10 times at practice.

Injuries have also mounted this season. Starting receiver Frank Ladson had surgery this past week for a groin injury while offensive lineman Matt Bockhorst tore a knee ligament. Both are out for the year.

Elliott believes there will be opportunities for Uiagalelei and Phommachanh in Saturday's game, no matter who starts. He's also confident in Uiagalelei's ability to move forward and improve.

“Be upset, be angry, be frustrated,” Elliott said to critics. “Because obviously we're not living up to the expectations that everybody has. But don't write that young man off.”