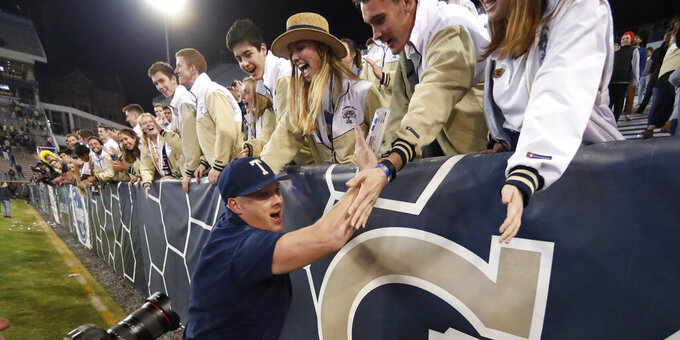 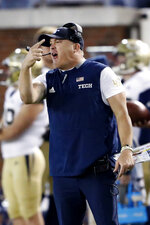 ATLANTA (AP) — Geoff Collins has delivered many well-rehearsed quotes about the enormity of his rebuilding job as Georgia Tech’s first-year coach.

The magnitude of the uphill battle he faces in the state rivalry game against Georgia escaped even Collins.

Collins on Tuesday shared precise details of the Yellow Jackets’ 51-48 overtime win over Georgia in 1999, when he was a graduate assistant on George O’Leary’s Georgia Tech staff. Collins was surprised when told the game was Georgia Tech’s last home win in the rivalry.

“That was a really, really good memory but I didn't know that part of it, that it was the last time,” Collins said.

Georgia Tech (3-8) will end its first season under Collins on Saturday when the Yellow Jackets try to end that 20-year home drought against No. 4 Georgia (10-1).

The Bulldogs have won two straight and eight of the last 10 in the annual “Clean Old-Fashioned Hate” battle for state bragging rights. Georgia has won nine straight visits to Atlanta.

The 1999 game was the middle of a stretch of four straight Georgia Tech-Georgia matchups in which both teams were ranked. Collins’ goal is to take the Georgia Tech program back to that level.

The Yellow Jackets have enjoyed few highlights in Collins’ debut season, but they were bolstered by last week’s 28-26 win over North Carolina State.

A shocking home loss to The Citadel and, more recently, a lopsided 45-0 loss to Virginia Tech, also at home, show there is much work to be done by Collins and his staff.

Georgia is a four-touchdown favorite on Saturday.

“It's a great game, great rivalry,” Collins said. “The thing I've talked a lot about is getting this game back on the national stage that it deserves to be.”

Collins has a coaching link with Georgia coach Kirby Smart. They worked together on Nick Saban’s Alabama staff in 2007. Smart was the defensive backs coach and Collins was director of player personnel.

Smart said he sees the impact Collins has made since taking over a roster that ran the triple-option offense for 11 years and has learned a new pro-style attack.

Collins could find no greater boost for his program entering the offseason than to knock the Bulldogs out of the College Football Playoff picture. He characterized that motivation as an “external” factor which he wants his players to ignore.

Collins said his focus will shift to recruiting on Sunday. Beating Georgia would send a strong message to in-state recruits, especially those in the Atlanta area.

“Obviously recruiting matters and we've made that a priority and will continue to do so,” Collins said. “We want to make sure we're building the program the right way with such a backyard of elite high school players and elite high school coaches.”